'Scream Queens' Looks Familiar, But That Might Not Be So Bad 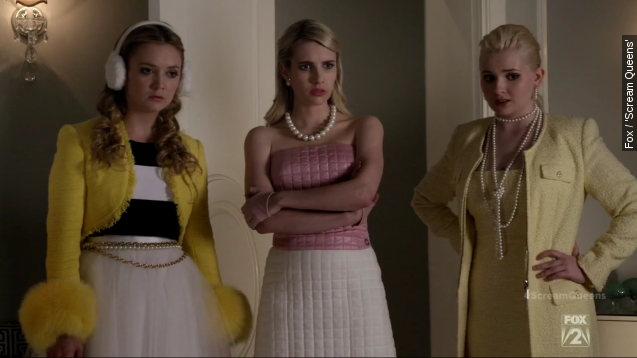 Murphy has described the show as "'Heathers' meets 'Friday the 13th,'" and his fans have been dying to get a taste of this new flavor. (Video via Fox / "Scream Queens")

But is it just us, or does said new flavor taste a little ... familiar?

Even if you didn't know "Queens" is a Ryan Murphy original, you probably caught on within the first minute or so of the pilot.

It's "Glee" meets "American Horror Story," no ifs, ands or buts about it. With a little blood and gore mixed in, of course.

You've got a creepy, masked serial killer on the loose preying on unsuspecting victims for no apparent reason.

Reminiscent of pretty much every season of "AHS," well, ever. (Video via FX / "American Horror Story")

You've got your strict social classes and snarky insults that gave "Glee" its delicious drama time and time again. (Video via Fox / "Glee")

"I'm sorry, did I ask you to pull down my panties and blow a compliment up my butt?" (Video via Fox / "Scream Queens")

OK, so "Scream Queens" might not be as novel as we all thought. But that's not necessarily a bad thing.

Many critics are loving the pilot, despite its obvious ties to the past. And there are some key differences that set it apart.

As a writer for Forbes summed it up, "The program is a sharply written dark comedy that provides a good dose of social commentary and is laugh-out-loud funny."

Hopefully, the rest of the season will deliver more of this bloody-good, new combination. You can catch new episodes of "Scream Queens" Tuesdays on Fox.