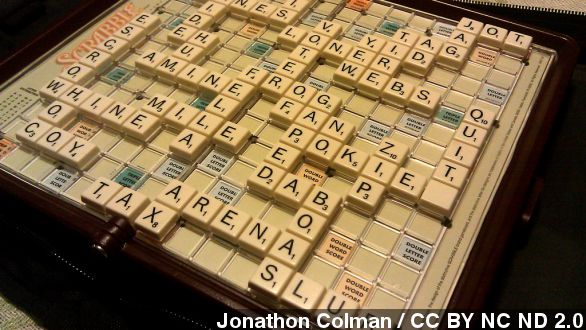 Scrabble fans are about to get a lot more choices when mix-and-matching those lettered blocks. 5,000 new words have been added to the official dictionary including "selfie," "bromance" and "buzzkill." (Via mydalliance / CC BY NC ND 2.0)

It's been 10 years since the classic word game updated its vocabulary, and the new additions — including "hashtag," "dubstep" even "schmutz" — inject some 21st-century lingo into the 76-year-old game. (Via KTNV)

So far, Merriam-Webster, the company that publishes "The Official Scrabble Player Dictionary," has only released 30 of the 5,000 new words it will add to its expansive 100,000-word archive. So we really only got a small sample.

One powerhouse of a new word: quinzhee.
ABC
: "This is apparently a shelter made from digging in a pile of snow. ... There's a potential of a 401-point play."

Plus some two-letter words have been added as well: da (short for dad), gi (a white garment worn in martial arts) and po (which is a chamber pot). (Via Jonathon Colman / CC BY NC ND 2.0)

John Chew, co-president of the North American Scrabble Players Association, said the updates will "go a long way toward bringing us closer to the language as it is currently spoken." (Via CNN)

As nice as the modernized vocabulary is for the word game, some Scrabble enthusiasts have shrugged off the new additions.

Forbes contributor and Scrabble enthusiast Jeremy Greenfield says most die-hard Scrabble players don't even use the official dictionary due to some questionable entries. He cites the book "Word Freak," which says some players are offended by the inclusion of "'jew' (a verb meaning 'bargained in a miserly way') and others, like 'fart' and 'fatso.'"

Greenfield said players instead use competing dictionaries like "The Official Tournament and Club Word List" or, for international players, the extensive word list called "SOWPODS." (Via Howcast)

The new 5th edition of "The Official Scrabble Players Dictionary" goes on sale Wednesday, but the new words will be sidelined for the upcoming 2014 National Scrabble Championship in Buffalo, New York, on Aug. 9, as the updated official dictionary goes into effect on Dec. 1st.