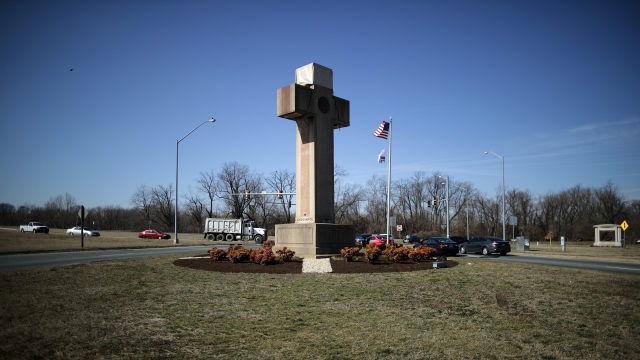 SMS
SCOTUS Rules Cross-Shaped War Memorial Can Remain Standing
By Katherine Biek
By Katherine Biek
June 21, 2019
At issue was the fact that the World War I memorial in Bladensburg, Maryland, is located on public land.
SHOW TRANSCRIPT

The U.S. Supreme Court ruled Thursday that a controversial war memorial can remain on public land.

First — a little background. The memorial in Bladensburg, Maryland — which is in the shape of a cross — was built by the American Legion in 1925 to honor dozens of local Americans who died in World War I.

The issue revolved around the fact that while the memorial was originally erected on private property, ownership of the land was later transferred to the Maryland-National Capital Park and Planning Commission. Since then, the government agency has paid for the cross's upkeep and maintenance.

Back in 2017, an appeals court agreed with challengers that the memorial's location on public land violated the First Amendment's establishment clause, which prohibits the government from favoring one religion over another.

But the state planning commission and the American Legion, which appealed that ruling, argued that the memorial is constitutional because it serves a secular purpose.

In its 7-2 decision, the Supreme Court concluded that the memorial doesn't violate the separation between church and state.

In his majority opinion, Justice Samuel Alito pointed out that the cross is no longer just a symbol of religion. He wrote, "destroying or defacing the Cross that has stood undisturbed for nearly a century would not be neutral and would not further the ideals of respect and tolerance embodied in the First Amendment."

In a concurring opinion, Justices Stephen Breyer and Elena Kagen agreed that the case would have been different if the memorial had been recently built.