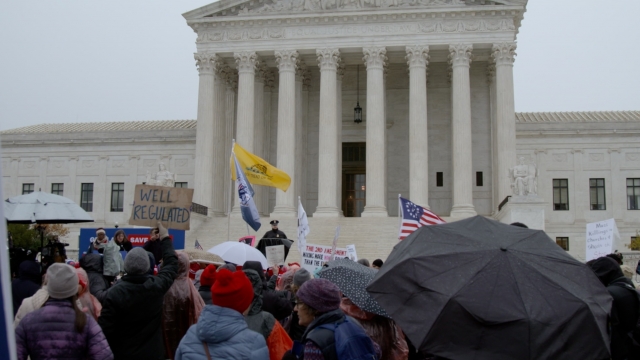 The case revolves around a gun transport ban in New York City that hasn't been on the books in months. That ban said gun owners with a "premises" license could have guns in their home or business and could transport them to specific gun ranges in the city, but could not transport them outside the city.

That regulation was repealed over the summer, but the Supreme Court went ahead with the case anyway.

We were inside during oral arguments where the question of mootness was addressed right up front. The question was whether this case is still a live controversy, or should the court dismiss? Justice Ruth Bader Ginsburg asked, "What's left of this case?"

Hannah Shearer wrote a brief on behalf of the Giffords Law Center to Prevent Gun Violence.

Shearer: "At the end of the argument, I was cautiously optimistic that the court was going to dismiss this case as moot. It seemed as though Justice Roberts wasn't pressing the city too hard on their mootness argument and he seemed  to accept their representations that there just wasn't any controversy left."

But even if this case is mooted out, Ilya Shapiro from the Cato Institute says it's likely the court will take up another guns case.

Shapiro: "I think there's an appetite on the court to start fleshing out this area of law. ... There's a whole stack of cases piled up just waiting. It's not that they're in process. The petitions, the briefings have all been filed and they're waiting for the court to act."

At the same time as oral arguments, gun safety organizers demonstrated outside the Supreme Court. Some of the groups hosting the demonstration filed amicus briefs urging the court to dismiss the case as moot since it was already resolved on the local level.

They feel that a Second Amendment ruling from the court could jeopardize current gun safety laws, while gun rights groups supporting the petitioners are welcoming a ruling that could broaden gun rights and provide guidance for lower court rulings on gun cases.

The justices are expected to deliver a decision before July 2020.