The SCOTUS Travel Ban Case Could Have Implications Well Beyond Trump 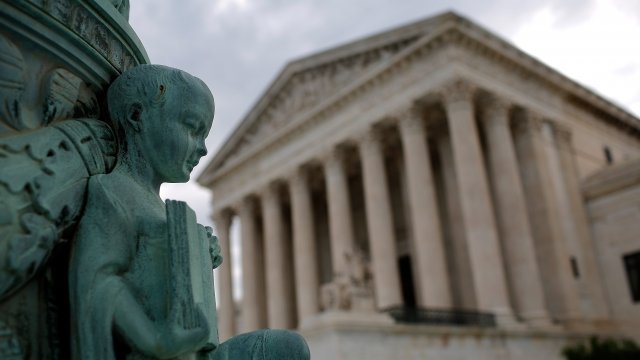 SMS
The SCOTUS Travel Ban Case Could Have Implications Well Beyond Trump
By James Packard
By James Packard
April 22, 2018
The Supreme Court is set to hear oral arguments in President Donald Trump's travel ban case Wednesday. But this isn't just about the travel ban.
SHOW TRANSCRIPT

One of the most talked-about Supreme Court cases of the year is set to be heard this week: the legality of President Donald Trump's so-called "travel ban." The outcome of this case is particularly weighty not just because of its leading role in public conversation but also because of its implications for executive power.

The case is about the third version of the "travel ban." That proclamation restricts travel for people coming to the U.S. from eight countries. Hawaii argues it violates the Constitution on several fronts.

The high court will look at four main issues here. The first is whether the court can even rule on the case. The Trump administration says no because legally, the court shouldn't second-guess the executive blocking entry of non-citizens to the country. The other side says the court needs to rule on it because Americans' rights are being violated if the travel restrictions stay in place. 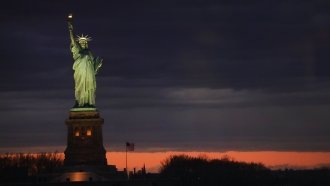 Millions Of Visitors To US Could Soon Face Social Media Vetting

Then the court will move on to three other points. Chief among them, does the president's proclamation go beyond the scope of his authority? Congress gives the president a pretty broad license to restrict immigration to the country if he deems that immigration "detrimental to the interests of the United States." The rule's challengers here say that because so many people are affected, the president's proclamation widely exceeds his authority.

The court will also decide if the proclamation violates the establishment clause of the Constitution, which says the government can't make a law favoring one religion over another. The president's two previous "travel bans" restricted entry only from Muslim-majority countries. Certainly, those versions of the proclamation and the president's seemingly anti-Muslim tweets could play into Hawaii's argument here, but it's not clear if the justices will actually take that into account. As experts point out, the Supreme Court doesn't typically look at potential influencers like that to deduce a policy's intent.

Finally, the court will look at whether district court rulings that partially blocked implementation of the restrictions were too broad.

So there's a lot happening here, but the outcome could ultimately set the tone for how a president can use executive authority to implement immigration law. What's happening Wednesday is the oral argument. We might have to wait until June to get a SCOTUS ruling on this one.