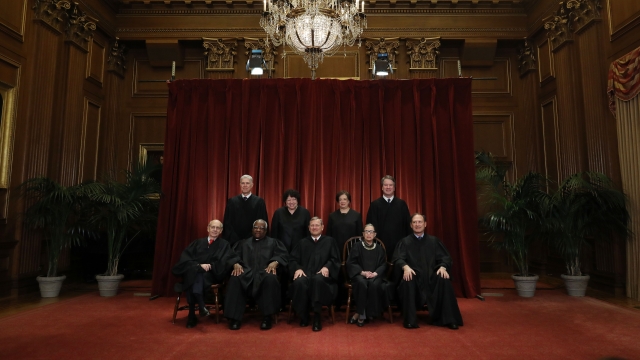 SMS
SCOTUS Hears Arguments On Cross-Shaped War Memorial
By Katherine Biek
By Katherine Biek
February 27, 2019
The cross-shaped memorial was originally built on private property, but has been maintained by a government agency for decades.
SHOW TRANSCRIPT

A controversial war memorial is at the center of a legal dispute being weighed at the U.S. Supreme Court Wednesday.

The memorial in Bladensburg, Maryland — which is in the shape of a cross — was built by the American Legion in 1925 to honor dozens of local Americans who died in World War I.

The issue revolves around the fact that while the memorial was originally erected on private property, ownership of the land was later transferred to the Maryland-National Capital Park and Planning Commission. Since then, the government agency has paid for the cross' upkeep and maintenance.

Back in 2017, an appeals court agreed with challengers that the memorial's location on public land violated the First Amendment's establishment clause, which prohibits the government from favoring one religion over another.

But the state planning commission and the American Legion, which appealed that ruling, argue that the memorial is constitutional because it serves a secular purpose.

More than 100 members of Congress filed a brief in support of the memorial, writing that the appeals court's decision could put a number of other cross-shaped memorials across the country in jeopardy.

After hearing oral arguments from both sides Wednesday, the Supreme Court is expected to rule on the case by the end of June.