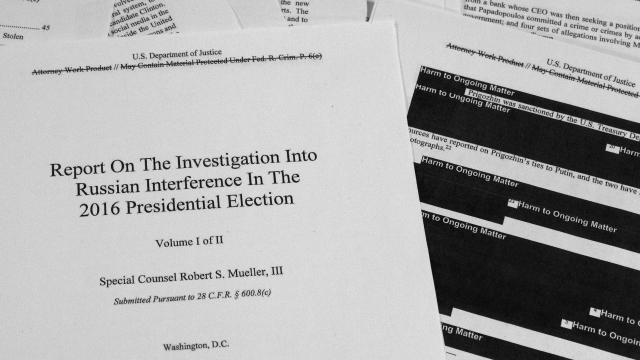 SMS
Supreme Court Temporarily Blocks House From Viewing Mueller Materials
By Stephanie Sandoval
By Stephanie Sandoval
May 20, 2020
The high court barred the House from accessing secret material from the Mueller report and gave the Justice Department until June 1 to file an appeal.
SHOW TRANSCRIPT

Earlier this month, the DOJ asked the Supreme Court to pause a lower court's ruling that it had to hand over the materials to Congress so that the department could file a petition for review. The high court issued a stay on Wednesday, giving the Trump administration time to formally appeal.

The House Judiciary Committee says it needs the materials as part of its investigation into whether the president obstructed justice, since Mueller's report didn't answer that question. That report, among other things, led to the president's impeachment and acquittal by the Senate in February.

Federal grand jury proceedings are kept secret but can be released if the material would be used "preliminarily to or in connection with a judicial proceeding." Two lower courts ruled that the release was appropriate, because the impeachment hearing in the House was preliminary to a judiciary proceeding, or trial, in the Senate. But the Justice Department argued a judicial proceeding is before a court, not lawmakers.

The department has until June 1 to appeal. If it chooses not to file or if the high court denies the appeal, the stay will be lifted.