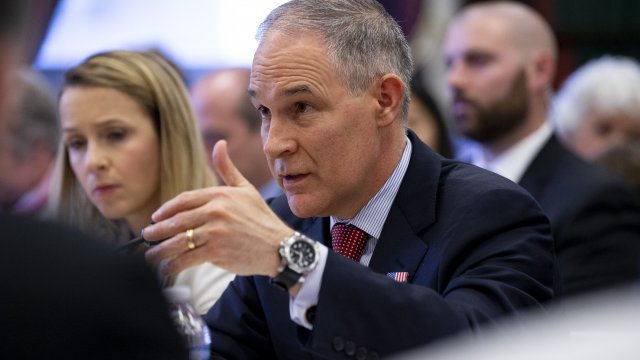 SMS
Congress Asks Scandal-Ridden Scott Pruitt If He Can Still Do His Job
By Kellan Howell
By Kellan Howell
April 26, 2018
In a congressional hearing, lawmakers pinned EPA chief Scott Pruitt's ethics scandals to his ability to carry out President Trump's agenda.
SHOW TRANSCRIPT

Environmental Protection Agency Administrator Scott Pruitt faced tough questions Thursday from lawmakers on Capitol Hill about a string of recent ethics scandals. But the person Pruitt really has to answer to is President Donald Trump.

"I think your actions are an embarrassment to President Trump and distract from the EPA's ability to carry out the president's mission, and if I were the president, I wouldn't want your help. I'd just get rid of you, but I'm not the president," said New Jersey Democratic Rep. Frank Pallone.

Pruitt is currently caught up in 10 federal investigations over ethics scandals involving expensive first-class flights he took, raises that were given to his personal aides and a $43,000 secure phone booth he purchased for his office at the EPA.

Now, Pruitt's facing calls to step down, but in the end that decision's likely up to Trump. So when questioning Pruitt, members of the House Committee on Energy and Commerce focused on whether the controversy surrounding Pruitt is harming his ability to serve the president.

The attacks were bipartisan, coming from both Democratic members and the Republican chair.

"I'm concerned that the progress being made on the policy front is being undercut by allegations about your management of the agency and use of its resources," said Republican Rep. Greg Walden.

Trump has expressed confidence in Pruitt for the moment. Despite that, Bloomberg reports that White House officials have been advising Republicans to scale back their support for Pruitt.

But GOP lawmakers on Thursday largely went to bat for him. U.S. Rep. Joe Barton of Texas called Pruitt a victim of "Washington politics" and U.S. Rep. David McKinley of West Virginia criticized Democrats for focusing too much on the controversies.

Pruitt pushed back against some specific reports.

"I was not involved in the approval of the $43,000, and if I had known about it I would have refused it," Pruitt said of the phone booth.

And he told lawmakers he "has nothing to hide." 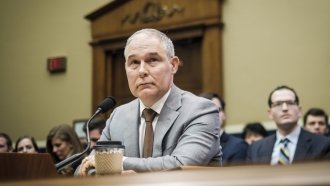 Pruitt said, "Facts are facts, and fiction is fiction, and a lie doesn't become truth just because it appears on the front page of the newspaper."