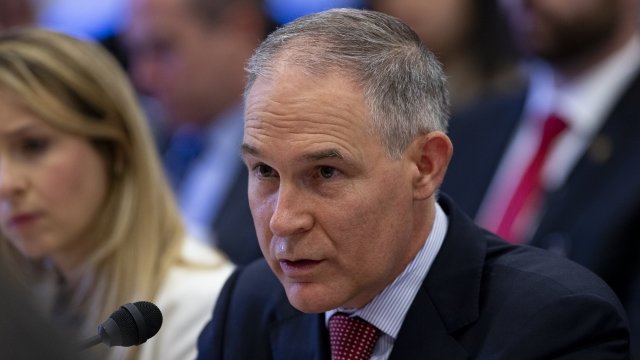 SMS
Scott Pruitt Asked For 24-Hour Security As Soon As He Took Office
By Briana Koeneman
By Briana Koeneman
May 15, 2018
According to a letter written by the EPA's inspector general, the agency granted Pruitt's request his first day on the job.
SHOW TRANSCRIPT

According to a letter written by the EPA's inspector general, the agency granted Pruitt's request for 24-hour security once he was confirmed as administrator.

Pruitt and the EPA previously argued he needed the pricey protection and first-class flights due to serious security threats against him.

Pruitt's spending on travel and security have led to several investigations by the White House, the Government Accountability Office, the Office of Government Ethics and both chambers of Congress.

And he's faced backlash over the $43,000 soundproof phone booth he had installed in his office and several expensive, taxpayer-funded trips he took, among other potential ethics violations.

Still, President Donald Trump says he has confidence in his embattled EPA chief.