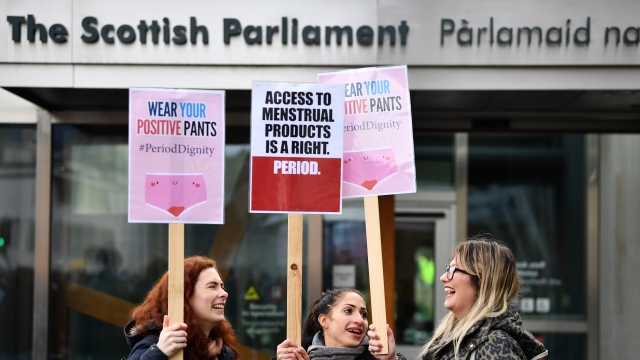 Scotland is one step closer to becoming the first country to provide free tampons, pads and reusable menstrual products to everyone who needs them.

"The result of the vote on motion 20756 in the name of Monica Lennon is yes: 112. There were no votes against, and there was one abstention. The motion is therefore agreed."

Lawmaker Monica Lennon introduced the bill last year after first drafting it in 2017. She said the bill passing through the first stage in Parliament is "a milestone moment" for normalizing menstruation and it showcases the seriousness of gender equality.

"Access to period products should be a right and available to all who need them. In doing so we can eradicate period poverty, and in doing so we can normalize menstruation and smash stigma."

Lennon said one in five British women will "face a struggle to access period products at some point in their life." She said she was motivated by stories people shared with her. One, for example, had to rely on food banks for period products so their children could eat, and a student had to miss college because they couldn't afford both transportation and a tampon.

All students in Scotland have had access to free period products since Scotland agreed to supply them back in 2018. That measure cost over 5 million pounds. Lennon's bill would make that provision law as well.

Lennon agreed with other lawmakers that there needs to be further discussion about funding for her bill — it's expected to cost about 24 million pounds, or a little over $30 million U.S. She said she is willing to listen to concerns and ideas in the second stage of the bill.

"We do have more work to do, but together we can put Scotland on the map as a true world leader in period dignity and equality. I look forward to continuing that work with MSPs right across the chamber, and I thank them for their support."