Scotland's Independence Vote: A Recap Of The Big Issues 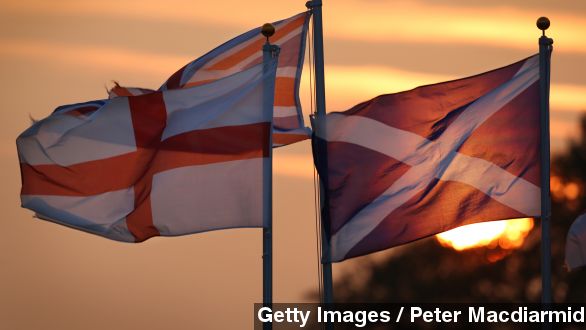 SMS
Scotland's Independence Vote: A Recap Of The Big Issues
By Jay Strubberg
By Jay Strubberg
September 17, 2014
Voters in Scotland head to the polls Thursday to decide whether to go it alone as a new country. Here's a look at some of the big issues at stake.
SHOW TRANSCRIPT

Will they stay or will they go? Scottish voters head to the polls Thursday to weigh in on a referendum that, if passed, could break up the United Kingdom.

There's been a lot of discussion over the past year on the challenges Scotland will face if it chooses to go it alone. Here's a quick recap of the big issues.

For starters, what currency will the new country use?

CNN spelled out Scotland's other options: starting its own currency or joining the Euro, both of which have the potential to take a long time and be a severe drag on the economy.

Speaking of the economy, the independence camp has said it will attract investments with a new, lower corporate tax rate.

But Scotland's financial institutions have threatened to relocate their headquarters to London if the "yes" vote comes out on top.

But maybe North Sea oil will help. An independent Scotland would be able to reap the full benefits of the oil drilled off its coasts, though critics say "yes" campaigners overestimate oil revenue.

How about defense? The debate has seen its fair share of hyperbole, from a Business Insider article on the threat of Russian submarine invasion to a passionate back and forth on whether independence dishonors Scots who died fighting for the U.K.

How about the National Health Service? A confidential report given to the BBC this week said an independent Scotland would face a 400-million-pound shortfall right off the bat.

As you can see, there are a lot of issues to be straightened out if the "yes" vote wins. There's also a lot of uncertainty, which is one of the main critiques of going it alone.

As for where the voters stand on the issue, The Washington Post got their hands on numerous September polls in Scotland showing pretty narrow margins but giving a slight edge to the "no" vote.