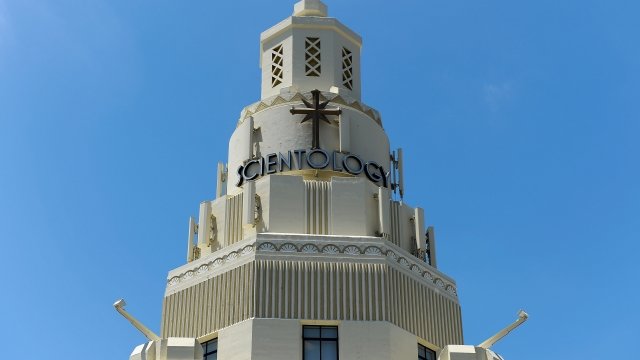 Its fight for tax exemption was dubbed "Operation Snow White," and it became a major operation of domestic espionage.

Read Scientology's full response to information contained in this article and on Newsy's "The Why" here.

Scientology might be best known for its big-name followers like Tom Cruise, Kirstie Alley and John Travolta, to name a few.

Cruise gave Matt Lauer a snapshot definition of Scientology in a pretty testy interview on "Today" in 2005: "You don't understand. You can be a Christian and be a Scientologist. It is a religion in that it deals with the spirit, you as a spiritual being."

Scientology wasn't always a religion. It started as a purported science, what founder L. Ron Hubbard, a former sci-fi writer, called a "science of the mind." That was the idea behind his 1950 best-seller, "Dianetics: The Modern Science of Mental Health."

Here are some key dates in Scientology's history. 1954: The Church of Scientology was founded in Los Angeles. 1957: The church is granted federal tax-exempt status.

1960: The release of the E-Meter, which supposedly measures an electrical current running through the body during questioning, exposing some inner dimensions during a process Scientologist call "auditing." The medical and scientific community dismissed its legitimacy.

1967: The IRS ruled that the church's activities were "commercial," and it lost its tax-exempt status. Hubbard refused to pay those taxes. Years of litigation followed and lawsuits flooded the IRS. During that time, 1973-1977, something was happening under the surface to fight back.

It was called "Operation Snow White." Lawrence Wright said in his 2013 book "Going Clear": "Nothing in American history can compare with the scale of the domestic espionage of Operation Snow White." The stated mission: use Freedom of Information requests to remove information from government files that Hubbard thought discredited him and his organization.

What actually happened: Scientology agents broke into the IRS and bugged a conference room. The moles got jobs in government agencies, including the IRS, and stole documents. The FBI discovered Operation Snow White in 1977.

Two years later, 11 Scientology officials, including Hubbard's own wife, Mary Sue, were convicted of burglary, obstruction of justice and theft of government property. They got jail time. Hubbard was named an unindicted co-conspirator.

In 1986: Hubbard died. But the fiscal fight continued. 1993: Scientology regained its status as a tax-exempt religion in a controversial IRS ruling. David Miscavige, now at the helm, offered to drop 2,500 lawsuits filed against the agency, according to The Los Angeles Times. A 25-year-old billion-dollar tax bill was settled for $12.5 million.

Scientology claims that millions of people sign up for its services every year, but most estimates put membership lower — much lower — in the tens- or hundreds-of-thousands range.

Most of its money is locked up in real estate holdings, which often escape tax bills. Fortune estimates that if Scientology ever lost its tax status again, it could get an annual tax bill of more than $20 million.