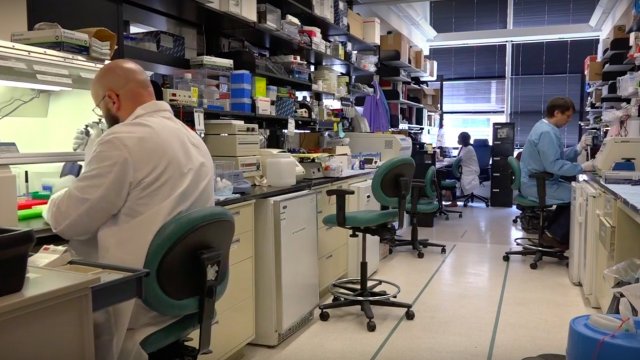 While the CDC says risk to Americans is still low, U.S. researchers and scientists are hard at work exploring possible treatments for coronavirus.

To date, there is no proven treatment for the novel coronavirus that has killed more than a hundred people in China and sickened thousands. But scientists are learning more about it, and now they're working to develop treatment options.

On January 10th China published the genetic sequence of the coronavirus strain. Scientists at the National Institutes of Health and the CDC used that to develop a rapid diagnostic test, like the rapid flu test at your doctor's office, but much more sensitive and specific. Right now, it’s only available at the CDC, but health officials said it could be available at the local level in a week or two.

The coronavirus has killed at least 170 people and infected more than 7,900 others.

In the meantime, NIH and companies like Johnson & Johnson are using that genetic code to test vaccine and therapy treatments. The University of Queensland in Australia, Moderna Therapeutics, and Inovio Pharmaceuticals are working with up to 11 million dollars in funding from the Coalition for Epidemic Preparedness Innovations too.

"I must emphasize, there is no proven efficacy of these, but they are being pursued together with the screening of a number of other agents. I might point out that is why it is so important that we get isolates of the virus, which we will soon have both particularly from the individuals in this country who have now been infected," Anthony Fauci, M.D., Director of the National Institute of Allergy and Infectious Diseases said.

The virus has now killed at least 132 people and infected more than 6,000 others in mainland China.

Researchers have also been looking into antiviral medication, based on current HIV treatments.It would block the proteins that coronaviruses need to replicate. US drugmaker Abbvie has sent more than two million dollars worth of antiviral HIV drugs to a hospital in Wuhan, China for a controlled trial.

The CDC is also testing monoclonal antibody therapy, which is used right now in cancer treatments. Scientists clone a stock of antibodies in the lab, which can then work just like the patient’s own antibodies, helping their immune system attack sick cells.

So far, health officials say these antibodies have only been tested in vitro and in animal models.

U.S. health authorities expect the most promising treatments could head to clinical trials in the next 3 months, and a mass vaccine is probably even further off. Testing it properly could take months or even years.

U.S. & Chinese officials haven't agreed whether the virus spreads before or after a patient shows symptoms.

"We are proceeding as if we will have to deploy a vaccine. In other words, we're looking at the worst scenario that this becomes a bigger outbreak," Fauci said.