Lawmakers Want To Treat Algae Like The Serious Problem It Is 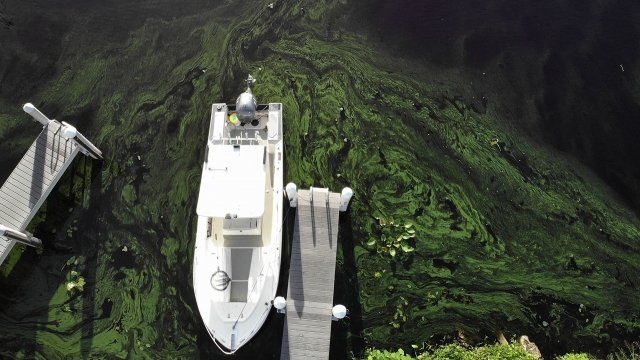 SMS
Lawmakers Want To Treat Algae Like The Serious Problem It Is
By Tyler Adkisson
By Tyler Adkisson
August 28, 2018
These blooms have been around for quite a while, but in recent years they've gotten so bad that the government is stepping in to fight the problem.
SHOW TRANSCRIPT

In recent years, algae blooms on U.S. coastlines have been getting bigger and lasting longer. When they turn toxic, as they have in Florida and Ohio, they threaten wildlife and human health. Now, researchers and officials say it's time to do more to protect against algae.

The Florida Poison Control Center has received 314 calls about toxic algae blooms so far this year, up from 96 for all of 2017. The blooms there have contributed to the death of over 2,000 tons of marine life, including a 21 -foot whale shark — a species that scientists have never seen die from being around harmful algae blooms before.

In humans, algae can aggravate the lungs and cause rashes, or worse. One 12-year study from Ohio State University found people living near harmful algae blooms were more likely to die from non-alcoholic liver disease. Other studies have shown links between algae exposure and Lou Gehrig's disease.

Now, some politicians are pushing for more resources to fight algae blooms as a long-term problem. U.S. Sens. Marco Rubio and Bill Nelson recently sponsored a bill to clean up algae blooms in Florida.

"The pictures are certainly horrifying enough, but in person … it breaks my heart to see our beaches and rivers foul like this" Nelson said. "We want to secure funding for research on the algae blooms."

Rubio and Nelson also recently called for budget amendments that would give the CDC an extra $1 million to track bloom-related illnesses and start public health campaigns.

Some scientists have criticized Florida's state health department for denying links between harmful algae exposure and long-term health impacts in humans. Now, researchers hope all this algae talk will get it the attention — and funding — it deserves.

"A take-away message today is that is that HABs, in their various forms, are a truly national problem that requires a comprehensive national research, monitoring and mitigation strategy," said Donald Anderson, senior scientist at the Woods Hole Oceanographic Institution. "The level of funding for competitive and internal programs has fluctuated significantly. And even with the recent increases over the last several years it remains well-below what is needed for an appropriate response."

From here, politicians and scientists both want to see even more long-term research, and quickly. Studies show that 62 percent of coastal counties in the U.S. have already showed signs of harmful blooms.