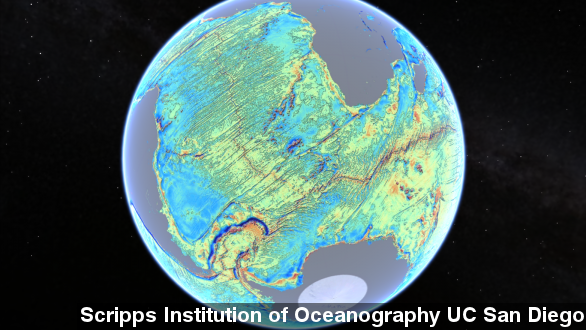 And they've discovered thousands of new "seamounts," or underwater mountains, with more trenches, ridges and scars than you can shake a snorkel at.

Scientists at the Scripps Institution of Oceanography at UC San Diego mapped the seafloor with the European Space Agency's CryoSat-2 satellite, which has primarily been used to measure polar ice data, and NASA's Jason-1 satellite.

Creating something called a "gravity map," Scripps used radars on the satellites to make gravitational measurements of the ocean floor. Add a little Google Earth action, and you suddenly have the most accurate map of the ocean floor ever.

Even though researchers say they've barely had a chance to look at the new data, they've already discovered new continental connections across South America and Africa and 150 million-year-old ridges in the Gulf of Mexico.

They're not very useful for climbing enthusiasts, but a researcher from the team told The Guardian the discovery of new features on the ocean floor could be helpful for military or oil exploration.

A report detailing the new map was published Friday in the  journal Science says seamounts between 1 and 2 kilometers tall are now more apparent than they were in older mapping data.

While that doesn't sound all that significant, one of the researchers told BBC where before oceanographers only knew of 5,000 seamounts, now they might be able to detect another 25,000.

Scripps estimates the new satellite scanning technique will allow them to improve data on 80 percent of the oceans which have been unexplored by the slower boating method.