Scientists Use Internet For Brain-To-Brain Communication 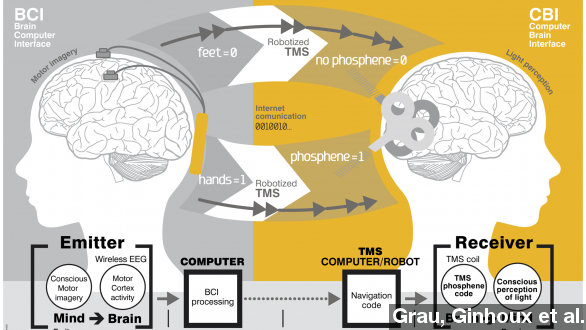 By Sebastian Martinez
September 7, 2014
The internet does it again — scientists send a message from a person's brain in India, to a recipient in France, through the internet.
SHOW TRANSCRIPT

Ah, the internet. It lets us do so many things: from ordering pizza to browsing endless cat pictures and now... telepathy?

A study by a group of international scientists published in PLOS One found a brain could transmit a message to another brain through internet channels, and as if that weren't enough — they did it across continents.

CHANNEL 4: "The experiment involved two people: one in India, and the other in France ... The signal is then translated into a code and sent via the internet to the cap of a receiver."

So the mental message of the transmitter was sent through email then translated back into brain signals in France and delivered through flashes of light in the receiver's peripheral vision to stimulate the brain activity.

Not exactly as efficient as a text or a Facebook message, but considering how early the technology is in its development, there are a number of possible applications and implications.

The scientists who conducted the study said hyperinteraction — one brain communicating directly with another — "will eventually have a profound impact on the social structure of our civilization and raise important ethical issues."

And futurists like Michio Kaku have predicted this kind of direct networking of human minds before. (Video via Knopf Doubleday Publishing Group)

MICHIO KAKU, VIA BIG THINK: "A brain-net whereby you would exchange not just information like typing, but also emotions, feelings. Because these are also part of the fabric of our thoughts."

MEYERS: "The scientists decided to create this technology because it was easier than explaining email to their moms."

This development hasn't really come out of the blue: last year a similar study conducted on rats made headlines as well.

Researchers at Duke University linked two rats' brains and observed that the signals from one of the rats could help the other complete a task and receive a reward. (Video via Pais-Vieira et al.)

If you were wondering about what message exactly they went through all that work to transmit from India to France, it was just two words: hola, and ciao.