Scientists To Use Successful Treatments To Combat Ebola In Congo 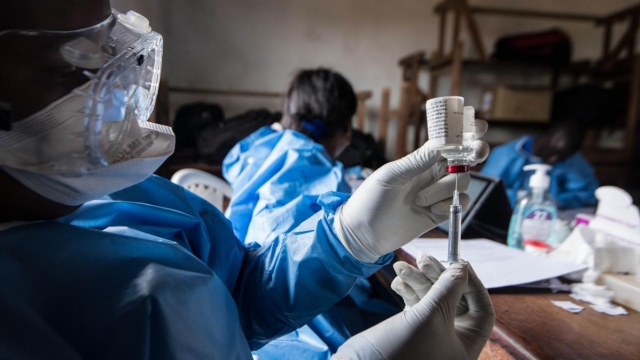 SMS
Scientists To Use Successful Treatments To Combat Ebola In Congo
By Lauren Magarino
By Lauren Magarino
August 13, 2019
Four drugs were tested in a trial with nearly 700 patients who had Ebola, but two of those drug treatments were found to be more effective.
SHOW TRANSCRIPT

Scientists tackling the Ebola outbreak in the Democratic Republic of the Congo say two treatments have been so successful in a trial, they plan on offering both drugs to all patients in the country. It's a breakthrough against the disease after the World Health Organization declared it as an outbreak in the country last year.

Six hundred and eighty one patients enrolled in the trial, according to a statement from the National Institute. It launched back in November of 2018.

Scientists tested four treatments, but two proved to be more effective. Ninety percent of patients who took the two drugs came out of the treatment cured, according to one scientist. To keep things simple, we'll refer to each drug by the name of its manufacturer.

The two drugs in focus were made by Regeneron Pharmaceuticals and Ridgeback Biotherapeutics. Both treatments have antibodies that cling to the outer shell of antigens, making it harder for the virus to enter cells and spread. They're administered intravenously into the blood.

Dr. Anthony S. Fauci, director of the National Institute of Allergy and Infectious Diseases broke down preliminary results for patients with low viral loads. He said only 6% of patients who received Regeneron's drug died. Eleven percent of those on Ridgeback Biotherapeutics' drug died. Meanwhile, 24% died after receiving a drug called ZMapp — an older treatment briefly tested back in 2014. And 33% died after getting a drug made by Gilead.

One WHO official said, "The more we can learn about these two treatments, the closer we can get to turning Ebola from a terrifying disease to one that is preventable and treatable."