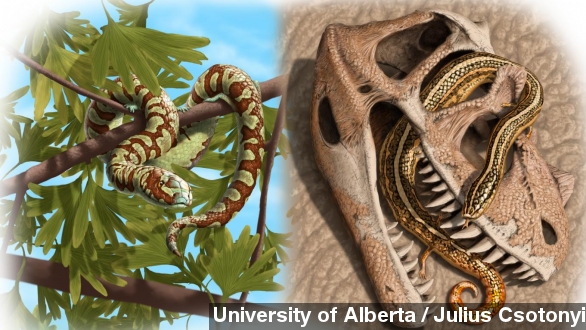 Scientists studying snake fossils have found the reptiles have been slithering around for a lot longer than we thought — 70 million years longer, in fact. (Video via U.S. Fish and Wildlife Service)

The fossils they found weren't new, and they weren't hidden in remote and exotic locations. They were all in storage. But they had been classified as lizards instead of snakes. (Video via University of Alberta)

Lead researcher Professor Michael Caldwell was actually on the hunt for lizard fossils when he realized the jaws of the fossils were a lot more snake-like, in that they weren't as tightly hinged as lizard jaws tend to be.

Snake jaws are much more flexible, allowing the snake to eat objects much larger than its actual head, something lizards can't do. (Video via National Geographic)

But the snake fossils date back to before the animal was thought to have lost its legs, which means the ancient snakes could have had four legs, and, therefore, looked a lot like lizards.

Then there are also contemporary legless lizards like the slow worm, which is distinguishable from snakes through its jaw design, and the fact that it has eyelids and ears, among other things. (Video via Youtube / Wild Diary)

Considering all those similarities, it's easy to see how someone might have gotten confused.

The new findings would put these ancient snakes at around 140 million to 160 million years old. It would mean they lived alongside the last dinosaurs and survived the extinction event, which wiped the larger animals out. (Video via Howard Hughes Medical Institute)

But as the University of Alberta points out, the findings also leave a gap in the fossil record, between the 160 million-year-old newly recognized snake fossils, and the 90 million-year-old fossils thought to be the earliest records of snakes.

It's possible that gap could be filled by other incorrectly categorized fossils, and Caldwell says there are almost certainly other older fossils out there.