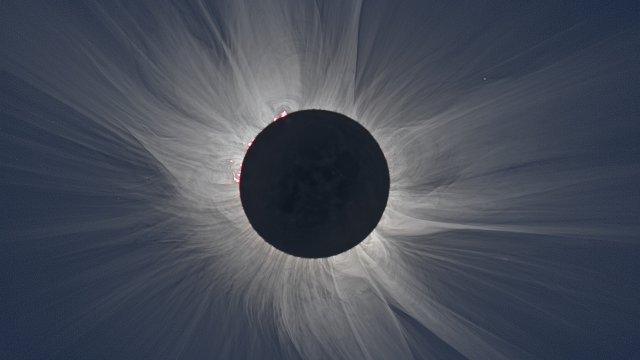 By Evan Thomas
August 14, 2017
The 2017 total solar eclipse is special. Unlike 1919, we now have the technology to study its entire journey over the U.S.
SHOW TRANSCRIPT

During August's total solar eclipse, skies over the U.S. will darken in the middle of the day, giving scientists a chance for some rare research.

"It's very hard to fake the thing the eclipse does for us," says Angela Speck, director of astronomy at the University of Missouri. "In blocking out the sun, it's able to make it so we have a dark sky. You can't do that from the ground with putting up your hand and making it dark."

Researchers will fan out across the U.S. to gather what's expected to be some of the most detailed data on solar eclipses ever: from its effects on Earth's atmosphere to subtle evidence of relativity. We'll explain. 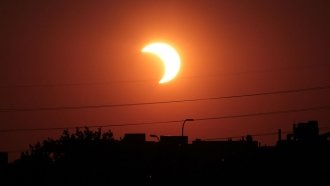 How An Eclipse Messes With Our Weather And The Power Grid

When the moon blocks the sun's light, we can measure how the mass of the sun bends light from stars on its far side. Our telescopes are much better than they were in 1919, when scientists first used an eclipse to study relativity.

"That allows us to test the details, not just, 'Does general relativity pan out?' We know it does," Speck says. "We've already done that. But what are the details of how light is affected by gravity?"

And, maybe most importantly, scientists will study the few parts of the sun that are usually too bright to see.

That's partly why scientists are still trying to answer questions about the corona — like how it reaches its sizzling temperatures.

"We don't fully understand where the energy comes from to heat it up so much. We're pretty sure it's to do with the magnetic field, but we don't know for sure," Speck says. "What we're able to do during an eclipse with looking at the corona is looking at, 'How does the sun fuel? How does it give energy to the corona?'"

They'll be racing against the clock, too. When the moon completely obscures the sun, astronomers and astrophysicists usually have less than three minutes to gather critical data. 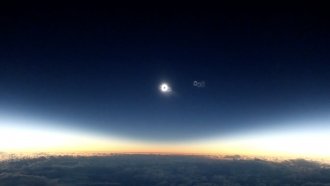 But observers in the U.S. are lucky. We haven't seen an eclipse this thorough since 1918 — and this time, our technology lets us combine observations from the eclipse's entire path.

"Instead of getting the couple of minutes you get of darkness, we can make it seem like we have 90 minutes — the whole time it takes to go across [the U.S.]," Speck says.