Scientists May Have Found An Early Sign Of Pancreatic Cancer 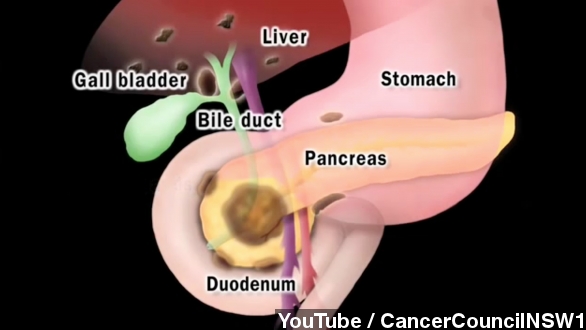 SMS
Scientists May Have Found An Early Sign Of Pancreatic Cancer

While any cancer diagnosis is devastating, pancreatic cancer can be especially so. It's the fourth leading cause of cancer-related death in the U.S.

The cancer is very hard to detect. According to the National Cancer Institute, there aren't tried-and-true symptoms and many times a diagnosis isn't given until the cancer is advanced.

The organ is also hidden behind others, including the liver and stomach, making it hard to reach. (Video via YouTube / Pancreatic Cancer Action Network)

That's why the news scientists may have found an early marker for the deadly cancer is so promising. Scientists think an increase in amino acids may be an early sign of the cancer.

According to the press release: "Although the increase isn't large enough to be the basis of a new test for early detection of the disease, the findings will help researchers better understand how pancreatic cancer affects the rest of the body."

Researchers examined 1,500 people's blood samples, which were collected years ago, and then made note of who did and didn't develop pancreatic cancer. (Video via YouTube / CancerCouncilNSW1)

One researcher said the findings did seem to indicate that the increase in branched chain amino acids, which help build protein, means there could be an early pancreatic tumor.

"The length of time between having elevated levels of these types of amino acids and pancreatic cancer diagnosis ranged from two to 25 years, the study authors reported."

So while the new findings won't lead to any sort of early diagnosis test, any progress is more than welcome for a disease like this one.