Scientists Have Figured Out Why Rocks Move In Death Valley 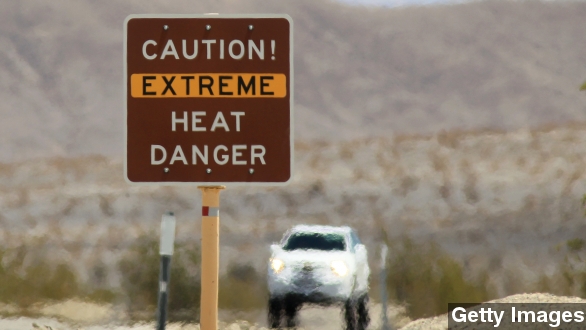 SMS
Scientists Have Figured Out Why Rocks Move In Death Valley

By Christine Slusser
August 28, 2014
The mystery of the moving rocks in Death Valley, California, has finally been solved. Scientists are pointing to a combo of water, ice and wind.
SHOW TRANSCRIPT

Death Valley in California is known for a couple things: its extreme heat and its weird moving rocks.

The latter has been a mystery since the 1940s, but scientists think they've finally figured it out.

The Los Angeles Times breaks down the scientific paper and explains how scientists think it happens:

First, rain comes down and wets the dried terrain. Then, with the chilly temps overnight, that water freezes. This magical combination, combined with the wind, makes the boulders move along the landscape like magic.

The theory has been around for a while — NASA covered it in 2010 when 17 grads and undergrads from the Lunar and Planetary Science Academy took a trip to Death Valley.

"It's thought that collars of ice can form around the lower parts of the stones. ... When more water moves in, the collar helps the rock partially float, so even a heavy rock might slide when the wind blows."

And of course the media couldn't pass up a story solving the mystery, even if they didn't know it existed in the first place.

KTRK: "The mystery of the moving rocks in Death Valley has been solved. I didn't know there was a moving-rock mystery, but there is."

KCAL: "After six decades of snooping around in one of the lowest and hottest and one most desolate areas of all of California, scientists say they've finally figured out the mystery of the slithering rocks."

XETV: "It does seem simple, doesn't it?"

While it does sound simple, researchers had to work hard to find the answer. National Geographic explains there was also some luck involved because sometimes the rocks don't move for years:

"Scientists have long known that whatever it is that causes the stones to move, it doesn't happen very often. ...That's why it's a fantastic coincidence that the researchers not only recorded evidence of rocks shifting by way of their GPS tags, but also witnessed the phenomenon in person this past winter."

Previous theories throughout the years have involved aliens (of course) and super high winds strong enough to push those heavy boulders that can weigh hundreds of pounds.

This latest research was published in the journal PLOS One.