Scientists Have Captured The Sound Of An Atom 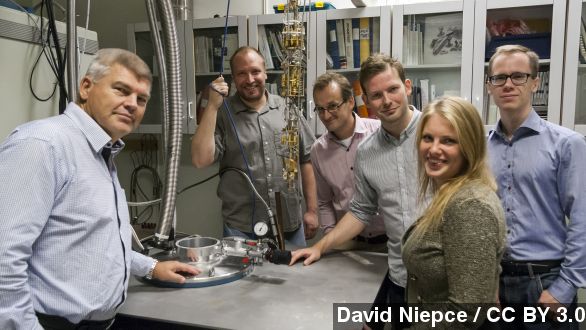 SMS
Scientists Have Captured The Sound Of An Atom

By Adam Falk
September 12, 2014
Scientists have captured the sound of a single atom by measuring its vibrations. We can't hear it, but it's reportedly the faintest sound possible.
SHOW TRANSCRIPT

Scientists now know what a single atom sounds like. But sorry, you can't hear it.

Here's what the setup looked like. To put the sound captured in musical terms, researchers from Chalmers University of Technology in Sweden said it would be a D28 – "about 20 octaves above the highest note on a grand piano."

Which begs the question, why research this? Well for one, because they could.

But more importantly, Gizmodo notes, "It's also a gateway to understanding the world of quantum sound."

Scientists have used photons in quantum experiments in the past, but the phonons — or particles of sound — captured through this research might lead to new developments in quantum computing.

The head of the research group said if this could be used to create electrical circuits that obey quantum laws, we could see extremely fast computers.

And phonons might have a better shot at it than photons because, as The Huffington Post says, "Sound has a short wavelength and travels 100,000 times slower than light, which means it's much easier to control."

Let's back up to exactly how researchers captured this inaudible sound.

Scientists placed a chip on an artificial atom — seen on the right. This absorbed energy from the chip and sent out what's known as a "surface acoustic wave" — a vibration that was picked up and amplified by the microphone on the left.

A co-author of the study told Motherboard: "Basically, when you excite the atom, it creates a sound, one phonon at a time, according to theory. It's the weakest possible sound possible at the frequency [that it vibrates]."

The results from this study were published Thursday in the journal Science.

This story includes images from Martin Gustafsson and Maria Ekström / CC BY 3.0; David Niepce / CC BY 3.0; and Philip Krantz, Krantz NanoArt / CC BY 3.0.