Scientists Find Out What's Been Killing Millions Of Starfish 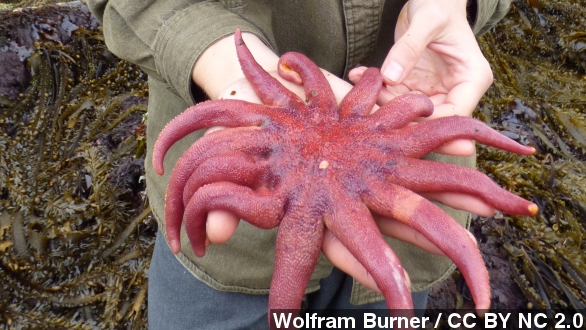 Scientists have identified the culprit behind a disease that's killed millions of starfish along the West Coast — an outbreak that could have a significant impact on marine ecosystems.

In a study published Monday, researchers said they could chalk up the wasting disease to a specific virus that drastically weakens the starfishes' immune systems.

The virus can lead to some pretty gruesome symptoms, like the starfish detaching its own arms without regenerating them, and essentially dissolving the starfish into goo. (Video via PBS)

Over the past year the disease has been detected on coastlines from Southern California all the way north to Alaska, with the bulk of the reports coming from the Northwest.

Divers in Washington state were some of the first to report the massive die-offs, including diver Laura James, who took extensive video of the dead starfish. (Video via Vimeo / Laura James)

Although the starfish killer now has an identity, the timing is still kind of a mystery.

The researchers said they have found the virus in starfish dating back 70 years, so it's not really clear why it only just started causing such massive die-offs. (Video via One Health Institute)

A writer for National Geographic points to the booming number of sea stars, which "may have given the virus newfound impetus. ... The virus could have more easily jumped from host to host, or developed mutations that made it more transmissible or virulent."

But an Oregon ecologist told the American Association for the Advancement of Science he believes it could be the increasing acidification of the world's oceans, a phenomenon tied to warming oceans.

Whatever it is, the effects could be far-reaching, because believe it or not, starfish are actually pretty important predators.

DREW HARVELL VIA KCTS: "We're losing a whole guild of stars that are voracious predators, all of which can control their ecosystem, and so to lose all of them at once, we don't even know what's going to happen."

Scientists say they're not sure how to reverse the trend on a large scale, although breeding resistant starfish in captivity is one option they're looking at.

This video includes an image from Wolfram Burner / CC BY NC 2.0.