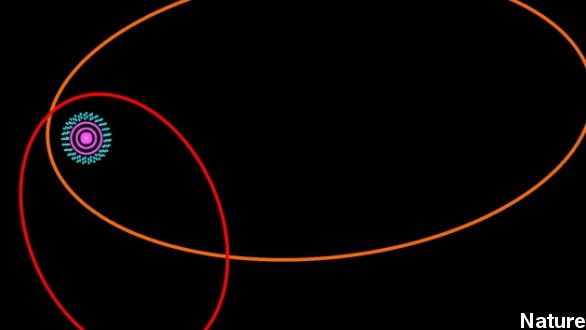 SMS
New Planet At Solar System's Edge Gets 'Biden' Nickname
By A.J. Feather
By A.J. Feather
March 27, 2014
Scientists have discovered a new dwarf planet on the edge of our solar system and nicknamed it after Vice President Joe Biden.
SHOW TRANSCRIPT

You know the discovery of a new planet is a big deal on its own. But maybe it's a bigger deal when it gets a nickname inspired by Vice President Joe Biden.

Astronomers have discovered a new planet that's so far away it has helped extend scientists' understanding of the solar system's edge. They say it's even farther away than Pluto. (Via CNN)

The new planet has been designated 2012 VP113, which prompted the discovery team to call it Biden for short.

Though Dr. Scott Sheppard, who co-discovered the new planet, told Politico the name is actually a result of the discovery classification system and has nothing to do with the vice president.

The Earth sits 1 astronomical unit away from the sun. Neptune, the most distant major planet, sits at 30. However, the newly discovered dwarf planet is 83 astronomical units away. It takes more than 10,000 years to complete one full orbit.

It is still unclear how the newly discovered planet and similar objects moved so far away from the sun. One hypothesis is a nearby star's gravitational pull could have dragged objects toward the edge of the solar system. (Via Nature)

Once scientists have confirmed the orbit of the planet, a name will be submitted to the International Astronomical Union. Until then, we're sure the vice president doesn't mind the exposure.