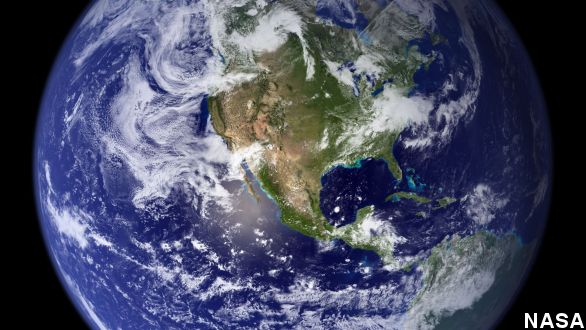 By Evan Thomas
June 13, 2014
Scientists say a layer of minerals in the mantle could hold three times the water present on Earth's surface.
SHOW TRANSCRIPT

New evidence suggests Earth's oceans might themselves be just a drop in the ocean. Scientists now theorize there's more water hiding beneath the planet's crust. A lot more.

A team of U.S. geophysicists has released a paper detailing a suspected rock layer in the Earth's mantle that could hold roughly three times the water present in all of the planet's surface oceans. (Via Science)

BBC reports scientists credit a mineral called Ringwoodite, which has a sponge-like crystalline structure that's perfect for trapping and holding hydrogen and oxygen atoms. So it's not H2O down there, but rather hydroxide — one atom each of hydrogen and oxygen.

In March, scientists at the University of Alberta discovered a natural diamond carried up from Earth's mantle by way of a volcano. It contained the first known sample of Ringwoodite and led scientists to theorize there was a lot more where it came from.

The way the waves moved suggested there were vast deposits of Ringwoodite slowing them down. As New Scientist put it, "It takes them longer to get through soggy rock than dry rock."

"There was then a hypothesis that maybe the deep earth has a lot of water. We found it. This is the direct evidence." (Via The Weather Network)

The confirmation supports other theories — for example, that Earth's original water came from within, and not from space aboard comets. One of the study's co-authors told The Guardian: "I think we are finally seeing evidence for a whole-Earth water cycle, which may help explain the vast amount of liquid water on the surface of our habitable planet."

But this water reserve is out of reach at 440 miles down in the mantle. The deepest humans have ever drilled into Earth is 7.6 miles, at the Kola Superdeep Borehole in northern Russia. (Via Atlas Obscura)

In any case, the water is probably better off down there. We'd have trouble with sea levels four times higher than they are now. (Via 20th Century Fox / "The Day After Tomorrow")

Scientists now want to determine whether this layer of Ringwoodite extends all the way around the globe. In the meantime, their findings have been published in the journal Science.