When's The Best Time For NASA To Open Its Last Lunar Samples? 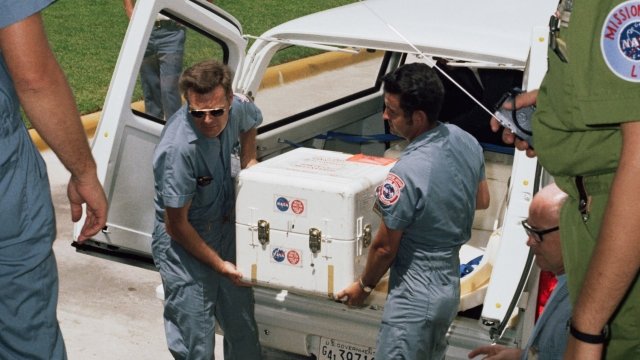 SMS
When's The Best Time For NASA To Open Its Last Lunar Samples?
By Evan Thomas
By Evan Thomas
March 15, 2018
There's a fine balance between preserving Apollo lunar samples and preparing for the future.
SHOW TRANSCRIPT

It's been nearly 50 years since humans last walked on the moon, but we could still learn new science from the lunar samples we brought back — if we decide to open them.

Apollo crews retrieved nine crates of lunar dirt and rock from six different sites on the moon. NASA keeps the one-of-a-kind collection in a special building at the Johnson Space Center in Houston, where it's handled with care: only six of those crates have ever been opened.

Studying the samples has already taught us a lot because rocks on the moon sit in a vacuum where there's no wind or rain to wear them down. This makes them great windows into the formation and history of the moon and much of the solar system.

The debate now is if scientists should open any of the other three, or leave them as pristine as possible until our scientific tools and methods are more advanced.

On the one hand, we only have so many uncontaminated samples left, and once they're used up, they're gone until we can go back to the moon for more.

But on the other hand, we are planning to go back. NASA, other national space programs and even some commercial ventures are considering a return to the moon. And the more we know about the raw materials there ahead of time, the more we might be able to use them. 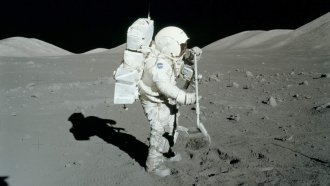 Some experts think moon dust would be pretty capable concrete, for example, like radiation shielding for surface bases. We could sift oxygen out of lunar soil or mine it for exotic fuel for future fusion reactors.

Some researchers plan to make the case for opening at least one crate soon, while there are still Apollo-era scientists and engineers active in their fields. Their insight and experience might be harder to replace than any moon rock.