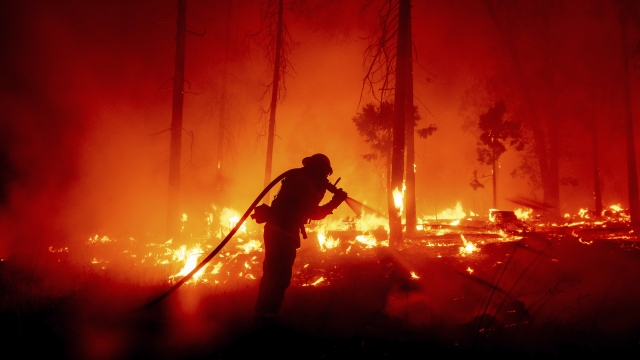 On the West Coast… one of the worst fire seasons in history. Thousands forced out of their homes, people killed. And on the other side of the country… one hurricane after another. Newsy spoke to climate scientists about what they think is causing it.

Tim Brown, a research professor at the Desert Research Institute, says climate change, fuel buildup like fallen limbs and grass, and people all play a role in wildfires. He says the majority of fires are human caused. A recent study by the University of Colorado Boulder found humans were responsible for starting 97 percent of home-threatening wildfires between 1992 and 2015 in the U.S.

"I’m a little hesitant to say that climate change is causing all these fires when you do have these other pieces," Brown said.

"Yup, no question about that," Brown said. "No question that that's a result of human activities."

But because of these warmer temperatures… natural fuels are becoming much drier. There’s also a lot more fuel than before.

"The fuel has built up so much so when fire happens now it can be a lot more severe," Brown said.

"I'm personally not convinced that just because you increase the temperature means that fires are going to keep getting worse because there may be a tipping point," he said. "So, in other words, it doesn't matter how much more temperature you add, you've reached the point where fires are going to burn very severely right and very aggressively anyway and it’s a research question now how have we actually reached that point or do we still have a little ways to go."

As for hurricanes there are some predictions as temperatures continue to warm.

"We think that hurricanes in a warmer climate are going to have higher rainfall rates," said Tom Knutson, a research meteorologist with the National Oceanic and Atmospheric Administration.

Scientists also think hurricanes will become more intense and the fraction of storms that reach Category 3 or higher will increase.

"And we already see globally an increase in that fraction looking at global data since the late 1970s," Knutson said.

But scientists are not sure why that’s happening. More research is needed. Knutson says there hasn't been any long-term change in the number of hurricanes that have made landfall in the U.S. But, according to data, they have seen an increase in Atlantic activity since the 1970s. The National Oceanic and Atmospheric Administration, also known as NOAA, has predicted a busy hurricane season for the Atlantic.

To date, NOAA says there have been eight hurricanes in the Atlantic basin, four of which have made landfall onto the U.S. so far this year. And the hurricane season isn't over until November 30.