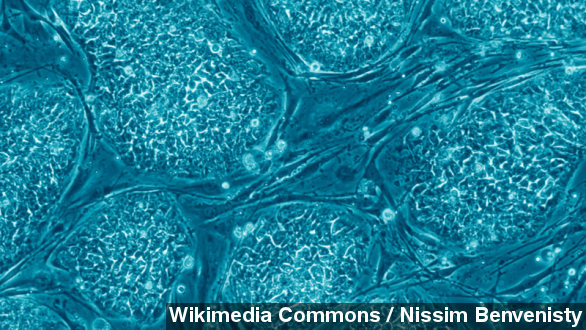 SMS
Scientists Create Stem Cells From Adult Skin Cells
By Kristian Mundahl
By Kristian Mundahl
April 17, 2014
The breakthrough could mean a cure for some serious diseases and even the possibility of human cloning, but it's all still a way off.
SHOW TRANSCRIPT

A breakthrough in human stem cell research could lead to the treatment of countless diseases, invaluable scientific research and yes, human cloning.

According to a study in the journal Cell Stem Cell, scientists have synthesized human embryonic stem cells from the cells of adults, creating two different lines from the skin of two donors.

Using the nuclear transfer method, scientists took DNA out of egg cells and replaced it with the donor DNA. The cells were basically reprogrammed, but of the 77 samples only two fully developed into cloned stem cells.

Lead researcher Robert Lanza says the five percent success rate isn't surprising. "Reprogramming is more difficult for adult cells than for fetal [and] infant cells, presumably at least in part because their epigenetic landscape from the pluripotent state," meaning the cell generally doesn't have the right enzymes for change anymore.

The researchers reportedly tweaked a method made famous by the cloning of the sheep Dolly in 1996 and improved by scientists at Oregon Health & Science University just last year.

The nuclear transfer method is the third discovered way to harvest or create stem cells. In the past, scientists have extracted cells from leftover embryos after in vitro fertilizations, a controversial practice. And in 2006 a Japanese researcher discovered a way to create them by injecting new genes. (Via Asian Scientist)

Lanza's method could provide easy access to stem cells, opening up new research into diseases like diabetes, Parkinson’s and even leukemia. And according to NPR, the researcher wants to create a virtual library of cells using carefully selected DNA donors.

The implications of a real and viable approach for creating stem cells could be startling, and scientists have been wrestling with the ethical questions since the cloning of Dolly.

An official at Oregon Health & Science University thinks studying stem cells is necessary, telling Time, “They have become kind of like cursed cells. But we clearly need to understand more about them.”

But with stem cell research also comes the debate about human cloning. The director of the Center for Genetics and Society tells The Oregonian the practice should be preemptively outlawed. "If we're going to be having cloned embryos in laboratories around the country, we really need to get our act together and have a law that prohibits human reproductive cloning."

But how close are we to a world of body doubles and evil clones? According to Paul Knoepfler at the University of California, Davis, not very. "I don't think that's coming anytime soon, but certainly this kind of technology could be abused by some kind of rogue scientist." ​(Via Universal Pictures)

It's still a toss-up whether this new method will prove better than other ways of creating stem cells from adults, but Lanza said it provides a new tool, calling it "another way to skin the cat."