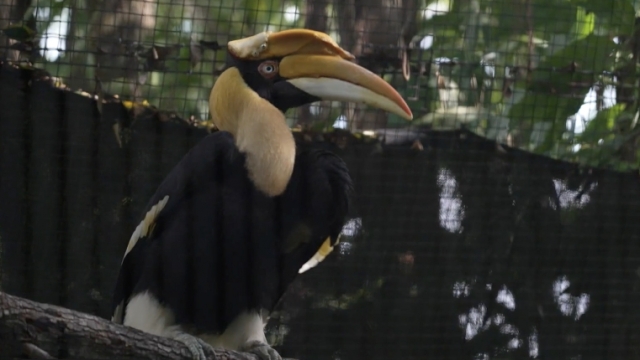 SMS
Scientists Create Prosthetic With 3D Printers For Vulnerable Bird
By Haley Bull
By Haley Bull
April 12, 2022
Scientists found cancer on the casque of Crescent, a 25-year-old Great Indian Hornbill. They removed the tumor and added a prosthetic casque.

Humans see medical advancements each day, but in Tampa, Florida, cutting-edge technology is meeting with veterinary medicine to help save a vulnerable species.

Perched in her home at ZooTampa, you can hardly tell anything was wrong with Crescent, a 25-year-old Great Indian Hornbill. But on her casque, the top portion of her beak and the helmet like structure on top of her head, is a sign of the efforts from a cross section of engineers, medical experts and veterinarians using 3D-printing technology.

"It is not something in veterinary medicine we frequently get to do," said Dr. Kendra Baker, an associate veterinarian at ZooTampa. "The amount of people that we spoke to that we talked to helped us to make this plan the most successful that it could be for Crescent is just fabulous."

Baker said a lesion on Crescent's casque was confirmed as squamous cell carcinoma, which is a common skin cancer form in humans but often fatal in hornbills. The cancer could have grown, eaten into her beak and not allowed her to eat, Baker said.

"After learning about a bird in Singapore that had had a similar lesion and they corrected it by removing it and then replacing the beak with a prosthetic we decided that would probably have the best outcome for her," said Baker.

So the team turned to medical experts at the University of South Florida Health and Tampa General Hospital. The scientists, who are experts in radiology and 3D clinical applications, work with human patients by day on things like patient education, pre-operative planning and creating custom devices and treatments. But in their volunteer time, they've been known to help out a few animals.

"Oh my goodness we have worked with I know more than 50 different species already from sea turtles to wallabies to baby sloths to manatees," said Summer Decker, Ph.D., the director of 3D clinical applications for USF Health and Tampa General Hospital in the Department of Radiology.

But the hornbill is a first.

Decker said they've only heard of a 3D prosthetic being created for a hornbill "one other time in the whole world."

The teams first got a scan of Crescent and her head.

"The cancer aspect is there," said Jonathan Ford, Ph.D., the technical director of the division of 3D clinical applications in the department of radiology at USF Health and Tampa General Hospital, pointing to a red highlighted area on the scan.

They were able to model the anatomy and cancer, then plan and print a surgical cutting guide to help remove the tumor as well as the prosthetic to fit over the part of the casque to be removed.

"For the bird we had to take into account where on the anatomy it was going to be," said Ford. "Because on the back of the head it isn't going to be impacted and used in feedings so we didn't have to worry about bite forces. So we were allowed to use a material that was able to be approved and not be rejected by the bird's tissue and be lasting long life. Also, it had to be able to survive being out in the elements."

The teams collaborated with Formlabs, which donated a new material in development called BioMed White Resin.

"This was a biocompatible photo reactive resin. So it actually forms as a liquid form and a UV laser shoots underneath and makes that geometry solid," said Ford.

In a statement to Newsy, Formlabs' director of medical market development Gaurav Manchanda said "Formlabs' 3D printers and BioMed materials are used to deliver precision healthcare, and clinical literature has shown improved outcomes when patient-specific prosthetics, medical devices, and surgical guides have been used with human patients. We're thrilled that our technology was also able to bring these same benefits to Crescent, who also uncovered a unique, unexpected benefit that warmed the hearts of everyone involved."

Decker explained the initiative called 'One World,' which is about working with vets on human medical technology. "I feel like we contributed a little to that being able to take this technology which is the cutting edge of human medicine and apply that to vet medicine it really puts that in their hands and they can do things they haven't been able to do before," Decker said.

The prognosis for Crescent is good. She even turned the prosthetic piece yellow, like she does for the rest of her beak.

"So, effectively, that shows us she's preening appropriately, she's showing natural behaviors which is great, her vocalizations are normal, she's holding her head normally, so everything turned out fantastic and we're very excited about it," said Baker.

The effort to help Crescent is also part of a conservation effort. She's considered middle age for her species and the International Union for Conservation of Nature lists the birds as 'vulnerable' with a decreasing population, with threats like hunting and deforestation.

"We don't have very many females of breeding age in zoological institutions to help with repopulation efforts so the fact that we have one now that has those extra 25 years left in her life is fantastic for the species as well," said Baker.

Crescent is described as a favorite of people at the zoo.

"She has a presence about her she's very majestic and when people see here because of her presence it inspires conservation," said Baker.

"When things are really tense and the world is kind of crazy, to hear all these people putting stuff aside to work together it just kind of restores your hope in humanity. Also seeing that bird fly in its enclosure and watching her be okay just makes me really happy," said Decker.