As Expected, 2017 Was One Of The Hottest Years On Record 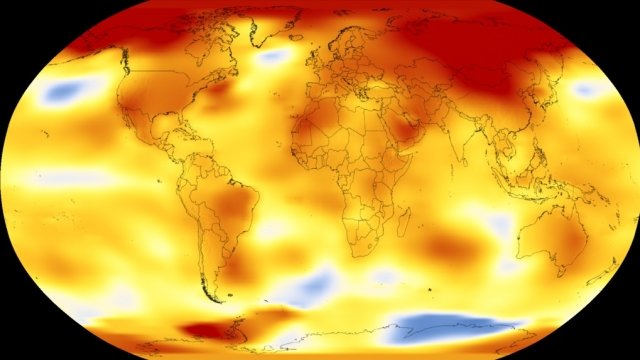 SMS
As Expected, 2017 Was One Of The Hottest Years On Record
By Evan Thomas
By Evan Thomas
January 18, 2018
Government research confirms what we saw evidence of early in 2017 — the year was one of the hottest on record.
SHOW TRANSCRIPT

Climate scientists from NASA and the National Oceanic and Atmospheric Administration confirmed what early evidence told us — 2017 was one of the warmest years ever measured.

"We are in a long-term trend," said Gavin Schmidt, director of NASA's Goddard Institute for Space Studies.

NASA lists 2017 as the second-warmest year in its records, while NOAA marks it as the third. Researchers say the differences in rank are likely due to how the two agencies measure polar temperatures.

Both agencies agree greenhouse gas emissions are driving the trend, which is apparent even without the warming and cooling effects of El Nino and La Nina.

"The planet is warming regardless of what's going on in the tropical Pacific," NASA climate researcher Gavin Schmidt said. "2014, 2015, 2016 and 2017 all would have been record warm years."

And this can lead to more than just unusually high temperatures. 2017 was the U.S.' most expensive disaster year ever. If the climate continues to warm, scientists anticipate it will displace more people, kill more species and steer us toward a serious resource crunch.

The good news is there's still time for policy and social decisions to help ease these pressures. In the U.S., increased use of renewable power sources drove nationwide emissions down in 2017. And so far, every other nation that signed the Paris climate agreement intends to stick to their emissions-reducing goals.