Scientists Build GMOs That Can't Live Outside The Lab 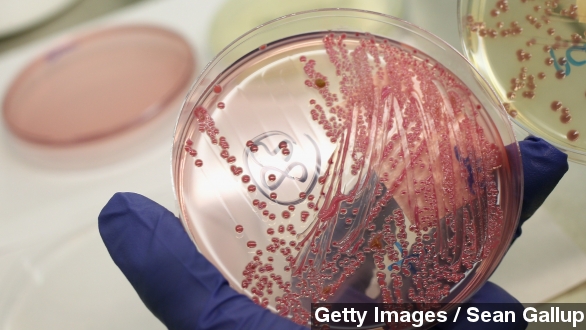 SMS
Scientists Build GMOs That Can't Live Outside The Lab
By Steven Sparkman
By Steven Sparkman
January 21, 2015
In a pair of new studies, researchers were able to make genetically engineered bacteria that resists viruses and needs synthetic food to survive.
SHOW TRANSCRIPT

Protests against genetically modified organisms, or GMOs, are becoming a familiar sight, usually taking aim at Monsanto or other agricultural companies.

One of the most frequently-cited concerns is that the things scientists build in the lab won't stay in the lab.

Two new studies published Wednesday in the journal Nature claim to show a way to put those fears to rest: by making GMOs that literally can't survive outside the lab, and are too different from their wild counterparts to breed and pass on their genes.

The studies use different techniques to do essentially the same thing: reprogram the DNA of the humble E. coli bacteria to depend on a certain amino acid. They also made the genes involved absolutely essential to the bacteria's survival, so it can't evolve to get around the barrier.

The idea isn't completely new. Remember how the dinosaurs in "Jurassic Park" were engineered to die if their handlers didn't give them a certain amino acid? That didn't work out so well.

But George Church, the Harvard professor who fathered the techniques and authored one of the papers, says the new genetic "kill switch" is much more secure, and he hopes that will make it safer and more attractive for industries to use GMOs. (Video via TED)

That already happens to some extent. With the right tweaks, E. coli becomes a tiny chemical factory and can be used to make all sorts of products, like insulin, for example.

But as the ability to rewrite the genetic code advances, new opportunities will present themselves, and it'll become more important to have safeguards in place to keep GMOs from spreading where they don't belong. But in case that's not enough to get businesses on board, the studies also present a way to make the technology much more tempting.

In one of the papers, the researchers not only programmed in an amino acid dependency, they also made the bacteria virus-resistant by rewriting its DNA until many viruses could no longer recognize it.

Viruses are a major threat to companies that use bacteria for production. In 2009, a viral infection shut down a pharmaceutical plant in Massachusetts.

Church says he believes they can eventually make their bacteria resistant to all known viruses. As for the "kill switch," he says more than a trillion cells of their modified E. coli have been given the opportunity to evolve their way around it, and so far not a single one has managed it.