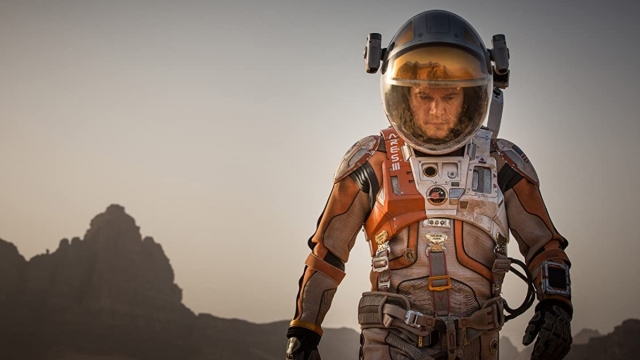 SMS
Science Fiction And Our Fascination With Stories About Mars
By Casey Mendoza
By Casey Mendoza
February 17, 2021
Scientists and science fiction writers talk about the importance of storytelling.
SHOW TRANSCRIPT

Science fiction fuels public fascination with space exploration. Stories of traveling to the moon predated the space race of the '50s and '60s, and fictional depictions of colonies on Mars are coming out at the same time NASA sends actual rovers — like Perseverance — to collect data from the planet.

Sylvain Neuvel, author of "A History Of What Comes Next": "I love the fact that my son has been excited by this."

Karen Osborne, author of "Engines of Oblivion": "I would dream about flying on the Enterprise and I'd watch the space shuttle launches go up."

Neuvel: "It sparks the collective imagination, and it creates future scientists."

Stories about Mars in particular say a lot about humanity's need to explore, as well as our fears about what could be out there.

Geophysicist and science writer Mika McKinnon: "A lot of stories about Mars start off as a version of the Western frontier cowboy, but set on a different planet. … There's also often the conquering story of what if we were at war with Mars."

As scientists made advancements in space exploration — successfully landing the first Mars rover in 1997 — more fiction about Mars started using real science, too, drawing on actual research and asking more questions like: How can we survive living on another planet?

Charlie Jane Anders, author of "Victories Greater Than Death": "I can still remember when nothing from Earth had been to that planet. So it's just so exciting when we're able to do things like that."

"The Martian" — both a book and Oscar-nominated film — is about an astronaut left behind on the Red Planet and the rescue mission to bring him back home. It's one of the most well-known "technically accurate sci-fi" titles, because it was driven by real-life research and accurate math.

McKinnon: "It's a story of survival and of adapting to your environment and of finding ways to make things work and of cooperation and collaboration to pull through together."

For audiences, stories like "The Martian" aren't just entertaining — they're informative about the science and the real-life work behind the scenes of labs and launch sites. Most importantly, they can help us imagine what's possible in the universe.

Neuvel: “Science fiction is going to be the way you’re introduced to things like artificial intelligence, genetics, bioengineering.”

Anders: "When it comes to the unknown, to the things that we've never seen or touched before, we always go there first with our imaginations."