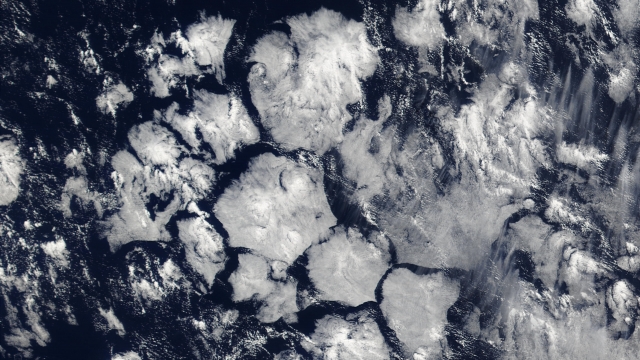 A Science Channel show claims hexagonal clouds could cause a weather disturbance capable of taking down ships and planes.

The mystery behind the Bermuda Triangle might be solved — at least, that's what a Science Channel show claims.

The Bermuda Triangle is an area in the Atlantic Ocean between Bermuda, Florida and Puerto Rico that's famous for unexplained disappearances of ships and planes.

And according to two meteorologists who spoke to the Science Channel for an episode of "What on Earth?," the mystery of the waters could be connected to some oddly shaped clouds.

Dr. Randy Cerveny and Dr. Steven Miller looked at satellite photos of the Bermuda Triangle and found hexagon-shaped clouds right above the area.

But in order to understand what the formations mean, the team had to look around the globe. They found similar cloud formations above the North Sea.

There, the hexagonal clouds bring winds up to 100 mph. Those winds have the ability to create ocean waves more than 30 feet high — easily high enough to sink a ship, according to the team.

The pair theorizes that the clouds above the Triangle might be causing "air bombs," or microbursts, that could force powerful winds downward and cause massive waves.

But there are a couple of holes in their theory. First, this weather pattern doesn't just happen in this area. These kinds of cloud formations reportedly happen in a lot of mid- to high-latitude locations, typically in colder seasons.

Also, those clouds might not actually be causing "air bombs." An NBC meteorologist says those formations don't look like microbursts.

The pair were slightly surprised with the angle the Science Channel series took. Cerveny told USA Today, "They made it appear as if I was making a big breakthrough or something. Sadly, that's not the case."