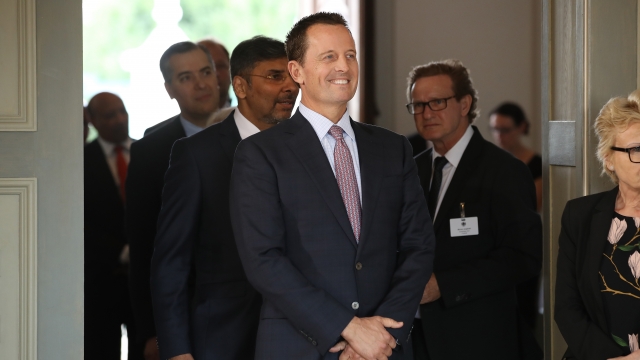 Senate Minority Leader Chuck Schumer urged the Justice Department to investigate whether Richard Grenell, the U.S. ambassador to Germany, failed to disclose any of his past work history for foreign entities.

Last week, President Donald Trump announced Grenell would be the next acting director of national intelligence.

A recent Pro Publica report said Grenell failed to disclose payments he earned while working for a Moldovan politician, who is now a fugitive, before he became the U.S. ambassador to Germany. During his confirmation hearing for the ambassadorship, Grenell said he wasn't paid for his work.

And earlier this week, The Washington Post reported Grenell's public relations firm worked for a U.S. nonprofit funded mostly by the Hungarian government. Grenell's attorney says that work did not require Grenell to register under the Foreign Agents Registration Act.

In a letter to John Demers, the assistant attorney general for national security, Schumer said: "If the reports regarding the nature of Mr. Grenell's undisclosed work with foreign entities are accurate, he may be subject to potential civil and criminal liability as well as vulnerable to blackmail in his new position in the Intelligence Community."

Schumer also said Grenell may have misled Congress about op-eds he wrote about Moldova and about any compensation he received for them.