Trump Threatens To Shut Down Government Over Border Wall Funding 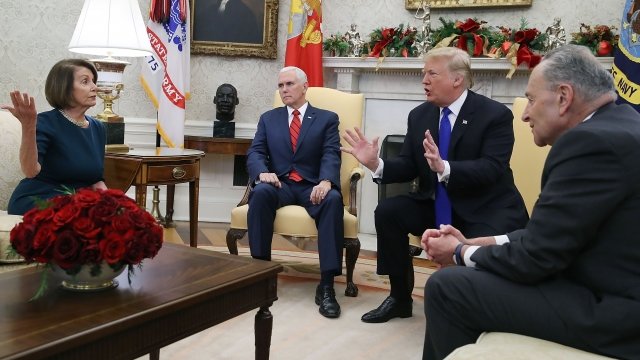 By Stephanie Liebergen
December 11, 2018
President Trump is again pushing for funding for his border wall, and he said he's willing to shut down the government to get it.
SHOW TRANSCRIPT

"If we don't get what we want, one way or the other, whether it's through you, through military, through anyone you want to call, I will shut down the government. Absolutely," Trump said.

"I am proud. And I'll tell you what, I am proud to shut down the government for border security," Trump said.

The three were discussing multiple issues, including the need to pass a budget. The current spending bill expires on Dec. 21.

Typically, these discussions happen behind closed doors — not in front of the White House press pool. And originally, the meeting was supposed to be closed to the press.

After the meeting, Schumer and Pelosi spoke to reporters again and held firm against any budget plan that sets aside money for a new border wall.

"This Trump shutdown, this temper tantrum that he seems to throw will not get him his wall, and it will hurt a lot of people because it will cause a shutdown," Schumer said.