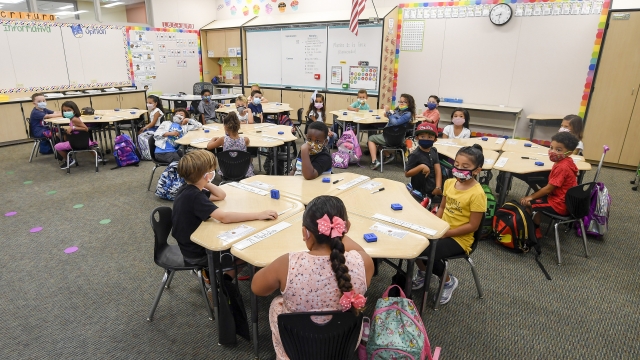 SMS
Schools Trying To Catch Up Kids And Keep COVID Out
By Newsy Staff
By Newsy Staff
August 3, 2021
Eight states are now banning local districts from enforcing mask mandates and some parents are concerned.
SHOW TRANSCRIPT

As schools get ready to open back up, nearly 9 in 10 parents say they're worried their kids have fallen behind. Another concern is more basic: Will my child be safe?

Lisa Cullom, who is principal and owner of Coastal Middle School, said: "This year is really the year of the unknown. There are a lot of kids who stayed behind because of COVID. That year of virtual school got them behind or they are staying behind because last year was a disaster."

Coastal Middle School lead teacher Alexa Wilhelm said, "Working as a team, I feel that's the only way we'll be able to get the school to run in general."

The CDC says masks are vital and should be worn by everyone in the building. Yet, eight states are now banning local districts from enforcing mask mandates and some parents are concerned.

"You are playing Russian Roulette when you are letting all these kids in who are unvaccinated without a mask." said Tara Smith Florida resident.

The CDC is clear on masking in schools because nobody under the age of 12 – middle and elementary – is vaccinated. Only about a third of kids in higher grades are vaccinated.

Sixty-one percent of the country is now at the highest possible level of community transmission and the surge comes just as schools get set to open.