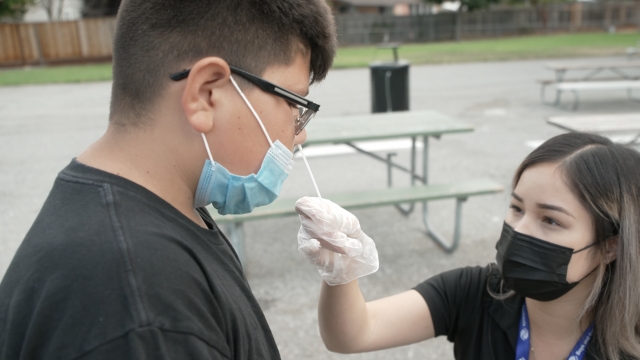 SMS
Schools hope rapid tests can catch covid outbreaks before they start
By Lindsey Theis
By Lindsey Theis
August 5, 2021
Some schools are using rapid COVID tests to monitor students on a weekly basis. Can it stop virus spread?
SHOW TRANSCRIPT

Bradley Portillo is going into the sixth grade this fall in East Palo Alto, California. And after in-person summer school, he’s ready.

"The most thing I'm looking forward to is getting a good grade and seeing my friends again," he says. At 11, he can't get a COVID vaccine yet.

Seeing friends comes with some risk. In this community, COVID cases are up again.

But much like the science that continues to evolve, his school has rolled with the punches. And that includes a team of rapid testers.  Earlier this year, the Ravenswood City School District was one of 10 districts across the state chosen for a pilot program getting access to millions of free rapid COVID tests. Now, any district in California can sign up to get free rapid tests. Ravenswood City’s partnered with the Boys and Girls Club, which has hired trained medical assistants to go to each school and test once a week.

Angela Ngo, lead medical assistant at Boys and Girls Club of the Peninsula, said, "The first thing I say to them is you're not sticking it all the way up, because they get very, very scared about that."

"I think I've only done four times. A lot of kids said, 'Oh, I'm not ticklish, I'm only ticklish on my feet.' So I just thought it felt, like, satisfying," Portillo says.

These lollipop-looking tests take about 15 minutes. If a test comes back positive, the student is quarantined and parents are called to take them home. Anyone in the same classroom would get quarantined and a call to get picked up, too.

Medical assistants wheeling through a couple of carts isn't groundbreaking, but after a year and a half of upheaval, it's a bit normal for the kids.

Originally, the school tried testing kids in the morning but found in addition to important temperature and symptom checks, it was too much. And keeping the stress level down for the students was key.

"I can't force them, you know. Like, their parents give them consent. But if they're not, I don't want them crying or feeling uncomfortable. So what we'll do is, like, you know, if you don't feel comfortable, then we'll try next time, or we'll ask, like, a teacher ... to come out and help us," Ngo says.

A little math lesson for how the testing we saw today went: They got results in about 15 minutes and went through 99 students and staff members in all. All those tests took about an hour long to get through.

"We've done almost 2,000 tests now since we started testing. And there's only been one confirmed positive through our testing," Waterman Roy says.

Waterman Roy, like many in the district, is looking forward to the school year. She says with more contagious COVID variants like Delta, testing will be even more important.

There's no one silver bullet.

NEWSY'S LINDSEY THEIS: "Testing is one tool. What other tools are you guys using?"

WATERMAN ROY: "We also have masking. We've had social distancing. One of the most important things is keeping kids in stable cohort so we know who they're engaging with. So if there is a positive case ... it's not had a chance to spread. It stays within a small group of kids," she said.

All of which -- the hope is -- keeps kids like Bradley on track and in class, in person, safely.

The big question, though: Is weekly testing going to be enough? With the Delta variant, someone who is infected can be contagious as soon as three days later, which is why we might already be seeing some of these outbreaks in school districts in other spots across the country.