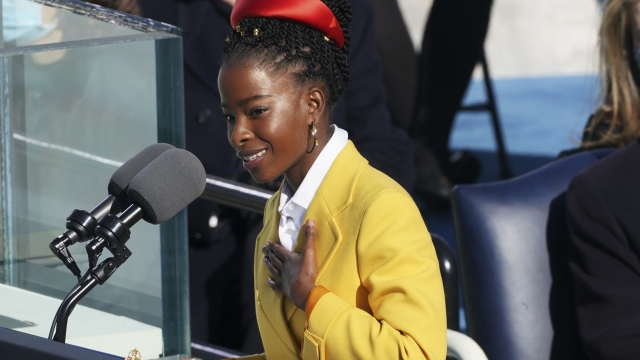 Inaugural poet Amanda Gorman: "And yes are far from polished, far from pristine, but that doesn't mean we are striving to form a union that is perfect."

Gorman, the first National Youth Poet Laureate and the youngest inaugural poet in U.S. history at 22, was one of the biggest breakout stars of the inauguration. In the days since performing "The Hill We Climb," which she finished on the day of the Capitol insurrection, Gorman's been praised by fellow poets and scholars across the country.

"To be the inaugural poet, there's all this pressure of like, you have to write a poem for the moment, right?"

Shonda Buchanan, poet and writing instructor at Loyola Marymount University: "She gave us the sense that language has the ability to address this … to unravel an ugliness and make it beautiful and make it manageable for us."

Gorman: "We the successors of a country and a time where a skinny Black girl descended from slaves and raised by a single mother can dream of becoming president only to find herself reciting for one."

Gorman's performance is now part of a legacy of political poetry — hence comparisons to past inaugural poet Maya Angelou and Los Angeles poet Wanda Coleman, who was best known for highlighting issues of class and racism in American society.

Rana Tahir, poet and assistant professor at Pacific University: "Poetry rises in moments of crises … and then we're continually forgetting and then reminding ourselves that yes, poetry can be used in this way — and it's effective."

Gorman: "We've seen a force that would shatter a nation rather than share it would destroy our country if it meant delaying democracy."

Tahir: "She didn't shy away from anything. … She called out the White supremacy that we've seen recently in action."

Going forward, scholars hope that the work by the L.A.-born, Harvard-educated Gorman can help inspire a new generation of poets and artists.

Tahir: "I hope that younger kids are looking at Amanda Gormin and going like, yeah, I want that. I want to do that."

Prince: "I advise our slam poetry club on campus here, and they idolize young poets."