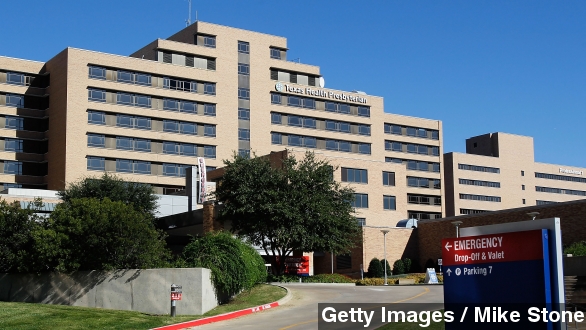 By Steven Sparkman
October 15, 2014
Staff at Texas Health Presbyterian say they received no guidance on how to handle an Ebola patient and didn't use hazmat suits for two days.
SHOW TRANSCRIPT

NBC: "Where he first sought treatment, and where, as we learned today, he was sent home with a 103-degree fever even after telling a nurse he had traveled from Africa."

Well, now the bad news is piling on. Nurses at the Texas Health Presbyterian have given a scathing critique of hospital policy, and we've also learned the workers who treated Duncan didn't even use hazmat suits until two days after he was admitted, despite the Ebola-like symptoms and his travel history.

The Dallas Morning News reports Duncan was well into the more contagious stages of Ebola, with symptoms such as vomiting and diarrhea, before health care staff abandoned their gowns and scrubs.

"The misstep — one in a series of potentially deadly mishandling of Duncan — raises the likelihood that other health care workers could have been infected."

The hospital has said 76 staff were involved in treating Duncan, but it hasn't said how many were exposed to him without protective gear in those first two days.

Some of those staff members lashed out at the hospital through the National Nurses United webpage, saying, "There was no advance preparedness on what to do with the patient, there was no protocol, there was no system." The statement also says nurses didn't have the right protective gear.

BBC: "Without flicking. No flicking."

And about what can go wrong.

CDC DIRECTOR TOM FRIEDEN VIA C-SPAN: "The protocols work. ... But we know that even a single lapse or breach can result in infection."

Hopefully we won't see any more nurses come down with the disease, but that can't be ruled out yet. As for the second nurse to test positive, Amber Vinson, she'll be transferred to Emory University Hospital in Atlanta for treatment — which could be seen as an admission that Texas Health Presbyterian dropped the ball.

SANJAY GUPTA VIA CNN: "It should be able to be done in Dallas. It can be done in West Africa by these Doctors Without Borders in these rural tent camps ... but for some reason it could not be done well in Dallas."