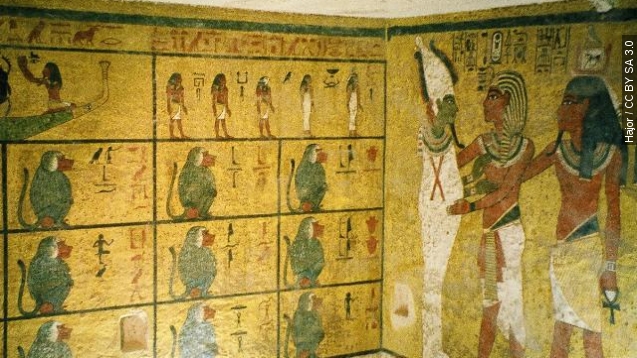 SMS
Scans Suggest A Hidden Chamber In King Tut's Tomb
By Ben Lawson
By Ben Lawson
November 28, 2015
The Egyptian antiquities minister says archeologists are 90 percent positive about the hidden chamber and some believe Queen Nefertiti may be inside.
SHOW TRANSCRIPT

Archaeologists believe they have located a hidden section of King Tutankhamun's tomb that may be Queen Nefertiti's burial chamber.

The announcement was made Saturday after a radar scan of a wall in Tut's tomb showed there could be another hidden chamber on the other side.

They were acting on a theory from Nicholas Reeves, a British archaeologist, whose speculation was met with a fair bit of skepticism. (Video via CBS)

But now, the Egyptian antiquities minister says they're 90 percent positive there is a hidden chamber that would represent "one of the most important finds of the century." (Video via Past Preservers)

Reeve's theory that the tomb belongs to Nefertiti is based on a few different things: Tut's death mask displays some feminine characteristics, meaning it might have been intended for a female wearer.

And the burial chamber itself is uncharacteristically small for a pharaoh, which suggests Tut might reside in what is merely an outer chamber of a larger complex. (Video via BBC)

It'll be hard to prove that it's Nefertiti's tomb without getting inside. Archaeologists may drill a hole through an adjoining room to get a camera in the chamber before attempting to open a wall themselves and risk damaging the ancient structure.

This video includes images from Getty Images and Hajor / CC BY SA 3.0.