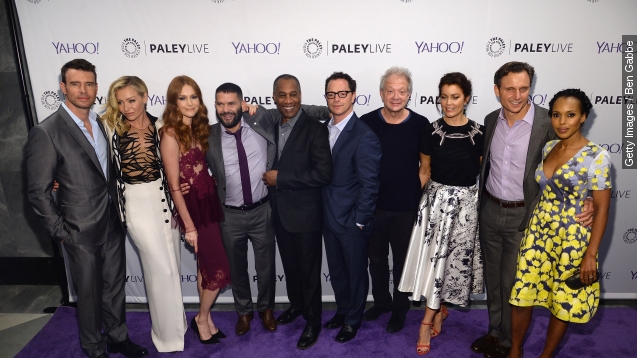 SMS
'Scandal,' 'HTGAWM' Casts Are Buzzing Over New Seasons
By Lexie Hammesfahr
By Lexie Hammesfahr
July 15, 2015
Judging by cast members' reactions, the new seasons of "Scandal" and "How to Get Away With Murder" are going to be wild.
SHOW TRANSCRIPT

"Scandal" and "How To Get Away With Murder" started production on the new seasons Tuesday, and "Scandal"'s Joshua Malina is "buzzing with moderate excitement."

Cast members took over social media with their reactions to the first table reads of the season, and their excitement has us excited.

Bellamy Young described the "Scandal" season premiere as "twisty," "fancy" and "sexy," and Katie Lowes said it will be "BANANAS."

And we can only imagine — especially since two of the cast pictures yesterday featured our favorite (or not so favorite) president with both of the women in his life.

Maybe this was planned by Shonda Rhimes to confuse us all, because Olivia and Fitz can't ride off into the sunset as easily as last season's finale made it seem — right?

Obviously they can't live happily ever after.

And script coordinator JC Fernandez already hinted at some signature Rhimes plot twists when he tweeted a message to the cast: "please wear chin pads to the #501TableRead so you don't injure your jaws when they drop on the table."

He apparently wasn't joking, either. A later tweet read: "what the h--- is happening right now? #ThingsHeardAtTheScandalTableRead."

The most shocking social media post from the "Scandal" table read was Guillermo Diaz's Instagram post from his costume fitting, which means that he likely didn't die in the season finale.

The fun didn't end with that table read, as the "How To Get Away With Murder" cast had their first table read for season two, as well.

Viola Davis looked like she was keeping her Emmy nominations nerves at bay when she tweeted a picture with her favorite on-screen student, Wes, played by Alfred Enoch, saying: "Fasten up. It's going to be a bumpy ride!"

We also got the title for the first episode: "It's Time to Move on."

But we're most jealous of the gladiator hoodies Rhimes had made for the "Scandal" cast. Harrison would so love these.

Get your long-stemmed wine glasses ready because Shonda Thursdays on ABC return Sept. 24 with "Grey's Anatomy" at 8 p.m. ET, followed by "Scandal" and "How To Get Away With Murder" at 9 and 10 p.m. ET.

This video contains music from Podington Bear / CC by NC 3.0.