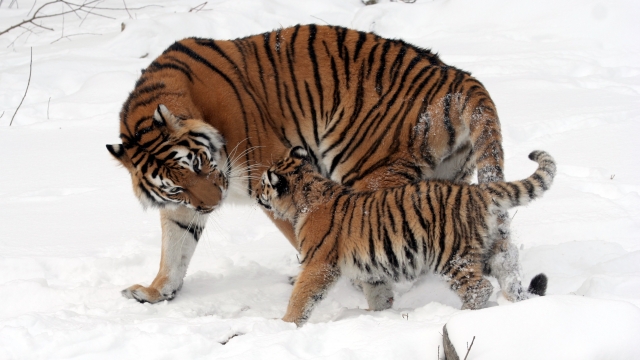 SMS
Saving Trees Could Also Save The World's Last Tigers
By Evan Thomas
By Evan Thomas
April 1, 2016
A new study shows there's still time to double the world's tiger population by 2022 if we repair and protect their habitat.
SHOW TRANSCRIPT

Tigers are already some of the rarest cats on the planet. Conservationists estimate some 3,500 remain in the wild.

Nations and conservation groups have committed to doubling tiger populations by 2022, with an initiative called Tx2.

And a new study checking on Tx2's progress confirms tigers can bounce back — as long as we minimize the damage to their habitat between now and then.

Researchers analyzed changes in tree cover and found between 2001 and 2014, tiger habitat shrank by 7.7 percent. That rate is only expected to increase as the economies of these tiger-hosting regions accelerate.

The researchers say several things need to happen if the cats are going to recover.

Essential territory that's already deforested would have to be restored, and priority habitat would need to be preserved.

And tiger-hosting nations would have to turn to green infrastructure and operate "essential translocation and reintroduction programs."

The tree cover tracking in this study could eventually supplement efforts to monitor tigers.

It can't fight poaching or count the prey animals tigers depend on for food, but the forests are easy to watch over time and can give us important feedback for the cats that live there.

This video includes clips from the World Wildlife Fund, Yorkshire Wildlife Park, the International Fund for Animal Welfare, Indonesia Nature Film Society / CC BY 3.0 and the Environmental Justice Foundation / CC BY 3.0 and images from Sumeet Moghe / CC BY SA 3.0. Music is from "Burner" by Birocratic (http://birocratic.bandcamp.com).