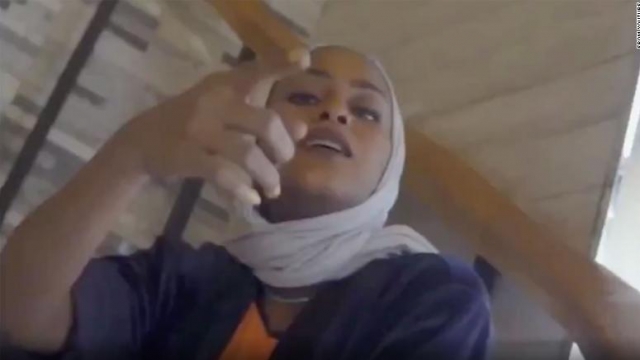 This is rapper Asayel Slay. She became known as "Mecca Girl" when her music and dance video produced in Saudi Arabia's holiest city became an online sensation. That is, until her YouTube channel was suspended — and Mecca's governor ordered her arrest.

Gov. Prince Khalid bin Faisal said the song "offends the customs and traditions of the people of Mecca and contradicts the identity and traditions of its esteemed population." He called for the singer's jailing along with everyone else who helped produce the video. It's unknown if Slay has been detained.

Her rapping celebrates "powerful and beautiful" women, in Slay's case as a Saudi woman of east African descent. As she raps, "With Mecca girls you can't compete," she strikes chords of female independence in a country recognized as one of the world's most repressive societies for women.

“I’m a Mecca girl. I’m a Pedigree girl. Because I work hard. During tough times. I don’t lean on others.”

The last time a video by a Saudi female performer went so viral was in 2018 when a performer called Leesa A. celebrated women winning the right to drive just a year earlier. But that video was largely celebrated. No government officials called for locking her up.