Saturn's 'Death Star' Moon Might Have A Hidden Ocean 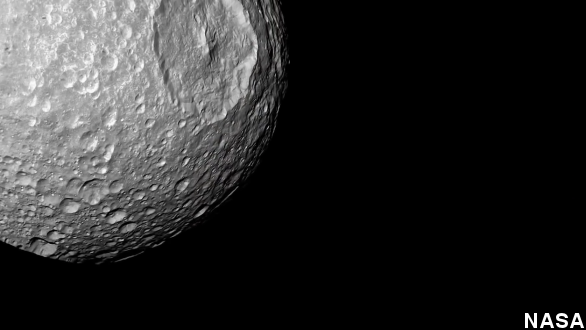 SMS
Saturn's 'Death Star' Moon Might Have A Hidden Ocean
By Becca Dunn
By Becca Dunn
October 17, 2014
The smallest of Saturn's main moons, Mimas, wobbles as it orbits. Research reveals it might be due to a global ocean underneath its icy surface.
SHOW TRANSCRIPT

Saturn's smallest main moon — called Mimas, or the "Death Star" — appears from Saturn to slightly wobble or rock back and forth as it orbits. New data and research provide theories as to why this is. (Video via NASA)

Astronomers in the U.S., France and Belgium based their models and calculations on measurements from NASA's Cassini spacecraft. They came up with two possibilities.

The first, via the BBC, is that beneath the moon's thick layer of ice is a global ocean.

Which, of course, many news outlets are eating up. Numerous headlines read that Mimas could be "life-friendly."

Or the second, that Mimas, which is only 250 miles in diameter, could have an elongated or oval-shaped core.

But Discovery explains these two theories don't make complete sense. So far, scientists have found no clues of an irregularly shaped core, which should be visible from the surface. And Mimas' surface is showing "no signs of heating."

However, it's important to note that Mimas' temperature distribution is known to be "bizarre" and "mysterious" by NASA. "Mimas is divided into a warm part and a cold part with a sharp, v-shaped boundary between them."

But the lead researcher of the study seems to favor the global sea theory.

He told the BBC: "When we saw this wobbling, the first thing we thought of was an ocean. ... This brings the spotlight back to this moon, which was a little bit ignored."

The researchers say more investigation is needed to refine their measurements. This study was published in Science Magazine.