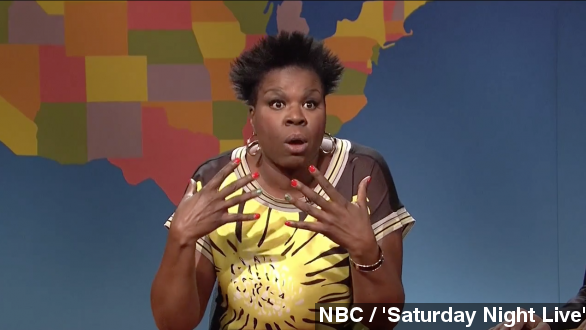 By Brice Sander
May 5, 2014
"Saturday Night Live" writer Leslie Jones is under attack for a slaved-themed segment she performed on the show over the weekend.
SHOW TRANSCRIPT

Comedian Leslie Jones' first on-camera appearance at "Saturday Night Live" over the weekend might also be her last ... for a while.

LESLIE JONES: "Back in the slave days, my love life would've been a lot better. Master would've hooked me up with the best brother on the plantation, and every nine months I'd be in the corner having a super baby. Every nine months!" (Via NBC / "Saturday Night Live")

Jones' "Weekend Update" segment was in response to People magazine naming Lupita Nyong'o the most beautiful person of the year." She said she can't compete with the Oscar winner.

Jones argued the magazine should put out a "most useful" ranking of women, saying she would've been the "No. 1 Slave Draft pick" because she was built to breed.

No surprise, Jones' debut set off a Twitter firestorm of attacks –– many viewers dubbing it offensive.

Jones, who says she's been doing the bit for years, was quick to combat the attacks, tweeting a long string of explanations, including:

"​It saddens me that BLACK PEOPLE b**** and moan about the most stupid s***. I'm a comic it is my job to take things and make them funny. ... If anybody should be offended is white folks cause it's what they did. Y'all so busy trying to be self righteous you miss what the joke really is​."

FYI, Jones is one of two African-American female writers "SNL" hired at mid-season — along with actress Sasheer Zamata — following months of attacks on the show for lacking diversity, and specifically, a black female cast member. (Via E!)

And that fact, along with Jones' refusal to apologize, had Ebony senior editor Jamilah Lemieux perplexed, calling Jones "an embarrassment."

"I don't know if she's just doubling down and committing to defending a completely indefensible ... skit, or if she really just doesn't grasp what was wrong with it. But it's depressing that Jones would play out her own issues ... in a way that ... mocked other Black women who may be taller, larger or outside the 'norm' in the process."

But a writer for The Root jumped to Jones' defense ... kind of.

"As a fan of comedians like Richard Pryor, Redd Foxx, Moms Mabley and Robin Harris, I grew up watching them tackling subjects from slavery to racism, and it wasn't always pretty. But what was consistent is that their audience was mainly made up of their own 'people.' Now when you have a show like SNL, where the audience is predominately white, you have to wonder, if they’re actually laughing at you or with you."

So, what specifically went wrong here? The Washington Post argues the major flaw in Jones' routine is that she never condemned slavery, something those comics The Root mentioned almost always did.

And an xoJane blogger notes the bit couldn't have come at a worse time.

"We've got enough trouble with Donald Sterling and Cliven Bundy, racial polarization in politics and segregated schools and the Supreme Court and Michigan and the whole entire prison system and, you know, racism. So. Thanks."

"Saturday Night Live" is thus far keeping quiet on the controversy — many outlets reporting the show has yet to return calls for comment.