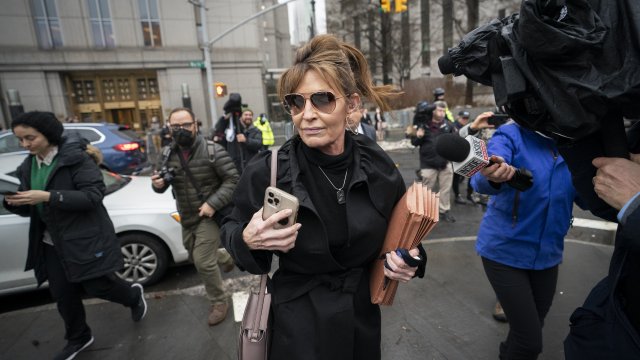 Former Vice-Presidential Candidate Sarah Palin is facing off against the New York Times.

After a brief delay when Palin tested positive for COVID, a trial for her defamation lawsuit against the newspaper began Thursday morning.

"What am I trying to accomplish? Justice for people who expect truth in the media," Palin said.

She's suing the Times and its former editorial page editor James Bennet over a June 2017 editorial titled "America’s Lethal Politics." It focused on two political assassination attempts and linked Palin's political action committee's advertisements to the mass shooting that left Congresswoman Gabby Giffords seriously wounded and six others dead. The paper corrected the record within 12 hours but did not apologize to Palin.

"It always helps to correct the record," said Lucy Daglish, dean at University of Maryland's Philip Merrill College of Journalism. "What a correction will do is it will not... reverse the actual act that happened, but it can mitigate the damages."

The former Alaska governor's case is a rarity — lawsuits against media outlets don’t usually make it this far. Lucy Daglish, a first amendment expert, says she's surprised it did. A more than half-century-old Supreme Court case makes it much harder for public officials to win these kinds of suits.

"The Supreme Court over the years and other courts have very accurately found that there's a difference between a sophisticated person who's in a public eye, who perhaps has been an elected official, or is currently an elected official, or someone that is in the news all the time, and they have access to the media to correct the record," Daglish said. "Whereas if my mother was libeled and it harmed her reputation, she's not in the public eye. She wouldn't know how to go about getting word out that she didn't do something."

For Palin, it will be an uphill battle. She will have to prove the paper and Bennet knew they were publishing false information and that they defamed her.

In his deposition, Bennet says he was making a commentary on the overall political climate. He said, "What I wasn't trying to say was that there was a causal link between - a direct causal link between this map and the shooting." The Times' lawyer calls it an honest mistake.