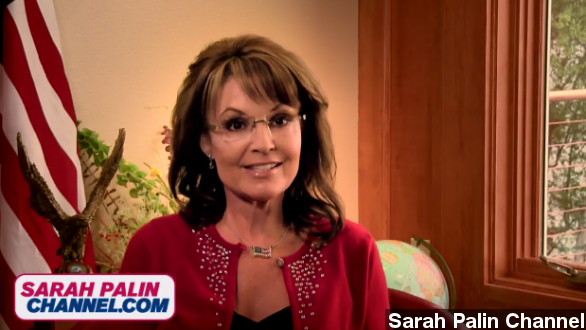 By Elizabeth Hagedorn
July 28, 2014
The Sarah Palin Channel promises subscribers "tired of the media filters" the chance to to engage with the former Alaska governor.
SHOW TRANSCRIPT

Five years out of office, Sarah Palin has proven she can still grab headlines for her often polarizing views. (Via The Huffington Post, Politico, The Washington Post, USA Today, CNN)

Until now, she's had no major media platform all her own to share those views. But that's all about to change.

"Are you tired of the media filters? Well, I am. I always have been. So we're going to do something about it. I want to talk to you directly on my channel … on my terms." (Via Sarah Palin Channel)

Access to the Sarah Palin Channel can be yours for just $9.95 a month. The online channel  — which went live Sunday — gives subscribers a chance to hear Palin's political commentary and to interact with her directly through group video chats.

Other features include a national debt clock and a countdown to President Obama's last day in the Oval Office.

Palin, of course, hasn't shied from the spotlight in recent years. She's a Fox News contributor, has penned a memoir and has hosted her own reality TV show. (Via Sportsman Channel)

But the former VP candidate turned reality TV star will take on a different role at her new online channel, serving as executive editor — overseeing what's posted to the site. (Via Getty Images)

Variety reports the channel is modeled after TheBlaze — the website conservative talk show host Glenn Beck launched back in 2011, which offers TheBlaze TV to paid subscribers on Dish Network and other cable systems.

Capital New York, which broke the story back in March, noted Palin's huge, built-in fan base probably appealed to Gaspin and Klein. "Palin's large social media presence (four million Facebook fans, one million Twitter followers) is probably a big factor in Tapp's recruitment of her. She may not have a daily radio or talk show, but she clearly has loyal fans."

Despite that fan base, a majority of Americans would rather not hear from Palin anymore. A recent NBC News / Wall Street Journal / Annenberg poll found 54 percent of voters would like the former Alaska governor to be less outspoken.