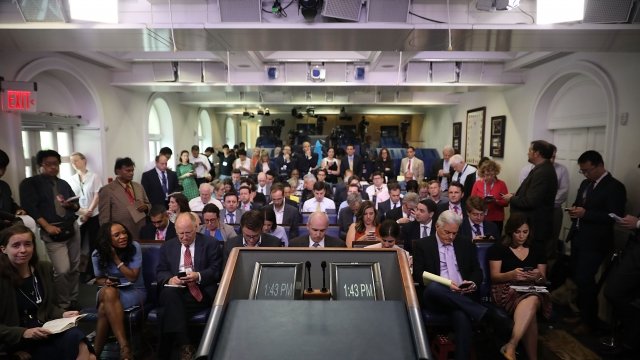 It happened during the first White House press briefing to be held on-camera in a week.

Cameras were allowed back on after a week of off-camera press gaggles at the White House.

Spicer has made headlines — and become the butt of jokes — for his aggressive, and at times inflammatory, style when addressing the press.

The highlight of today's briefing: Sanders took some time to criticize CNN for a retracted story about connections between a Trump associate and Russia, then branched off to hit other outlets for similar stories.

Sanders said there is "a constant barrage of fake news directed at [President Donald Trump]."

She added: "I think that we have gone to a place where, if the media can't be trusted to report the news, then that's a dangerous place for America. ... We've been going on this Russia-Trump hoax for the better part of a year now with no evidence of anything."

But one reporter wasn't having it.

Brian Karem of The Sentinel Newspapers pushed back, saying it wasn't fair to paint the entire news industry as "fake news."

"You mentioned the Scaramucci story, where they had to have reporters resign. ... Come on," Karem said. "You're inflaming everybody right here and right now with those words. This administration has done that as well. Why in the name of heavens — any one of us are replaceable, and any one of us, if we don't get it right, the audience has the opportunity to turn the channel or not read us."

He continued: "You have been elected to serve for four years at least. There is no other option than that. We're here to ask you questions. You're here to provide the answers."

"Everybody in this room is only trying to do their job," Karem told Sanders.

So, when we are wrong we correct ourselves but when has POTUS ever done that? We are not FAKE news.

He echoed his comments later on Twitter, saying: "When we are wrong we correct ourselves but when has POTUS ever done that? We are not FAKE news."

Sanders was also pressed on the Trump administration's reaction to the Congressional Budget Office score on the Senate's health care bill. She pointed to the budget projections of the score, but denounced coverage projections, citing inflated projections of coverage under the Affordable Care Act.

She said Trump and his team are optimistic about the bill.

"For us, it's never been about the timeline but about getting the best piece of legislation that helps the most Americans," Sanders said.