We Lie To Whole Generations Of Kids About Santa, And That's Fine 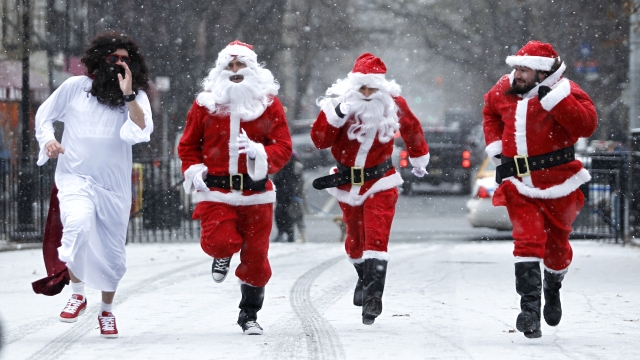 SMS
We Lie To Whole Generations Of Kids About Santa, And That's Fine
By Evan Thomas
By Evan Thomas
December 1, 2016
The Santa Claus myth doesn't appear to do any harm — and it can actually help kids with their critical thinking skills.
SHOW TRANSCRIPT

You might want to make sure your kids aren't listening in on this story — we're about to discuss some uncomfortable truths about Santa Claus.

Between the stories, songs and movies, there's more than a century of cultural weight behind the guy who lives at the North Pole. He even has his own government conspiracy: NORAD's tongue-in-cheek Santa-tracking campaign dates back to the 1950s. And it's all to lie to children.

SEE MORE: Why Does NORAD Stalk Santa's Epic Sleigh Ride Across The Globe?

That has to be bad, right? Some psychologists argue that when children learn the truth about Santa, it can damage the trust they have in their parents. But that's not what studies so far have shown.

It's true that kids are impressionable. The more parents push the Santa myth, the more the kid will believe in it. Young children tend to trust the things they're told aloud. And if kids of the right age see evidence that supports a claim — like, say, the cookies and milk left out for Santa getting eaten overnight — they're more likely to believe.

But as kids get older, they tend to get more skeptical about Santa, regardless of what their parents tell them. At 6-9 years old, they've usually started to grow out of it.

And it's not a harmful process. In fact, realizing and thinking through why Santa doesn't exist can actually help kids build their reasoning skills. They might not know the aerodynamics behind that sleigh, for example, but they start to grasp that he can't possibly fly fast enough to hit every house on Earth overnight.

Chances are they won't hold a grudge, either. In one study, kids weren't all that broken up when they learned the truth. Their parents were the ones who felt worse.