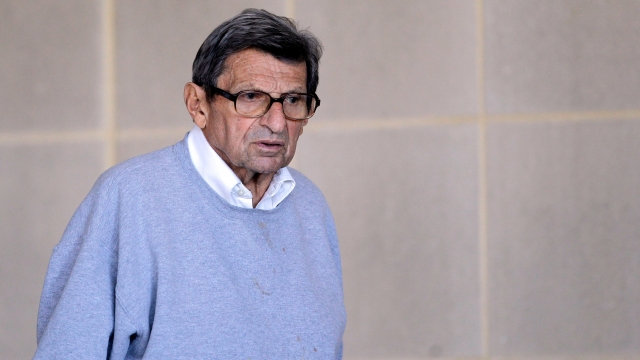 SMS
Sandusky Accuser: Paterno Knew, Ignored Child Sex Abuse Claims In 1976
By Matt Moreno
By Matt Moreno
July 12, 2016
A man who accused Jerry Sandusky of sexually assaulting him when he was 14 years old claims he told Joe Paterno about the incident in 1976.
SHOW TRANSCRIPT

A man who accused former Penn State assistant football coach Jerry Sandusky of molesting him as a child says he told head coach Joe Paterno about the incident in 1976, but Paterno ignored him.

That man, identified in newly released records as John Doe 150, was 14 years old at the time when he says Sandusky touched him and penetrated him at a university football camp.

The man's lawyer asked him in 2014, "Is it accurate that Coach Paterno quickly said to you, 'I don't want to hear about any of that kind of stuff; I have a football season to worry about'?"

The man responded: "Specifically. Yes … I was shocked, disappointed, offended. I was insulted … I said, 'Is that all you're going to do? You're not going to do anything else?'"

That's when, the man says, Paterno just walked away.

Exactly when Paterno knew about Sandusky's abuse of children has been a continuous question since the case first went public.

Paterno, before his death four years ago, said the first time accusations were brought up to him was in 2001. However, an independent investigation concluded Paterno knew in 1998.

A statement from Paterno's family denied the man's claim, saying, in part, "There is extensive evidence that stands in stark contrast to this claim."

The news comes about a week after roughly 200 ex-Penn State football players signed a petition to bring back Paterno's statue on the State College, Pennsylvania, campus. The statue was removed in 2012.

Sandusky, an assistant coach at Penn State for 30 years until 1999, is currently serving up to 60 years in prison for sexually abusing 10 boys while at the university.

This video includes clips from WHVL and The Daily Collegian, and images from Steam Pipe Trunk Distribution Venue / CC BY 2.0 and Getty Images.